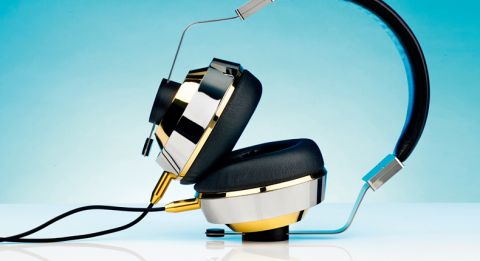 If first impressions count, then Final has got things nailed with its range-topping headphones, the Sonorous X. These arrive in an immaculately made fur-lined wooden box.

The first impression of these Sonorous X headphones lives up to its packaging thanks to the combination of stainless steel and aluminium ear-cup (covered with gold leaf, no less) and use of high quality leather.

It leaves an impression of luxury few headphones can rival.

While all that bling may be too much for our tastes, there’s no denying the solidity. These feel sturdy enough to last a lifetime, but they’re not flawless.

Some of the metalwork isn’t as well finished as we’d hope for, with some rough edges where the headband meets the earcups.

At 630g the Xs are heavy too. It’s enough to feel a marked sense of relief every time we finish a long listening session. That’s despite a wide, well padded headband and soft, comfortable earpads.

The over-ear design is chunky enough to look large on almost anyone wearing them, but the pads seal wonderfully. Together with the hefty build it means these ’phones are great at blocking any environmental noise, giving a really nice, quiet background for serious listening.

Inside you’ll find a 50mm titanium driver integrated into an aluminium front plate. The design’s impedance is claimed to be 16 ohms and maximum SPL is quoted at an ample 105dB.

The X comes with two sets of detachable cables; one that’s 1.5m long and the other twice that length. These fit into the headphone body with lockable collars. Just push and twist to secure into place.

You’ll need a top-class source and amplification to justify Sonorous Xs, at a minimum something like Chord’s Hugo and a Mac with quality media-playing software.

Anything below 16-bit/44.1kHz CD quality should be avoided, if you want to hear just how good these are.

Give these headphones a few days to run-in and it becomes clear that in certain respects they’re brilliant. We don’t think we’ve heard a pair of cans sound so authoritative.

Listen to a piece of music loaded with bass information, like Massive Attack’s Angel, and the Xs deliver lows of astonishing depth and power. The song’s growling bass is thumped out with grip and agility, and the kind of low-end weight that’s comparable to some of the biggest speakers around.

It’s not all muscle at low frequencies either. The Finals deliver plenty of texture too, rendering the double bass on Miles Davis’s So What as convincingly as we’ve heard.

Move to large-scale dynamics and things stay positive. The ‘phones have plenty of reach on material such as Tchaikovsky’s Marché Slave Op.31.

Here, the X’s exhibit rich tonality, refinement and composure, even when the music becomes complex.

Move up the frequency range and there’s more good news. The Xs dig up a lot of detail in vocal-based material such as Jill Scott’s Quick and these headphones and present it in a well-organised way.

But all is not perfect. While the Final’s presentation is fluid, we’re not fully convinced by the finesse. We miss the nuances in Scott’s voice, the low-level dynamic shifts that communicate emotion.

Through the Xs, Scott sounds like she’s rehearsing, whereas the likes of the Grado PS500s (around £500) are better at revealing the attitude in this song.

Material such as this shows up a lack of drive too. These headphones don’t communicate the changing momentum of music that well, or make the most of hard-charging rhythms.

The result is a notable drop in entertainment, which is hard to forgive.

The Sonorous Xs are impressive headphones in many ways. They’re close to state of the art in some areas, particularly when it comes to rendering the substance and body behind a voice or instrument.

We’re also taken with their refinement and ability to deliver a terrific amount of insight into recordings. But at £3500, we can’t overlook their shortcomings.

See all our over-ear headphone reviews