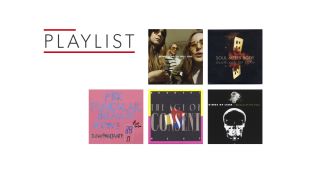 As much as David Bowie, Nina Simone, every Hans Zimmer soundtrack and late-80s spandex rock have become staple listening material at What Hi-Fi? towers, we're always eager to discover, or rediscover, new and old music – an easy feat nowadays thanks in no small part to music streaming services.

Every month we (figuratively) opening our test-room doors to share what we've been listening to, and the new releases we're looking forward to hearing.

Because of the Times by Kings of Leon - Adam Smith, staff writer

Kings of Leon’s Because of the Times is an odd album to rediscover. Ten years have passed and it’s distinctly not-of-the-times any more. Even then – and I was a sweet-eyed 13 year old at the time – the album didn’t say anything new.

Starting off with Knocked Up, a seven-minute track on how two people are going to have a baby, a subject important enough that the song doesn’t talk about anything else, to a song about a guy that comes running whenever his girl asks (On Call), to yet another girl that wronged the band in Charmer, True Love Way, and pretty much all their other songs.

Innovative? Maybe not. But when you’re a teenager your world revolves around girls, so it feels pretty spot on.

Since Because of… the band’s output has declined in quality significantly, their most notable single being a part of a Michael McIntyre set. Not what you would call rock and/or roll.

While the messages are clichéd, the spunky guitar riffs and squealing choruses have a distinct sense of youth about them - and a really good test of the treble on your system. It’s gritty like a kid’s knee when they trip on some gravel, and the lyrics strain out like a child being sick after having too much sugar.

This album serves as a time capsule, with carefree, self-important fun bursting out when you play it. It’s something to shout along to when it comes on the radio. It’s something easy and unassuming. It’s dumb fun. Sometimes that’s all you want.

View Because of the Times on CD and Vinyl at Amazon

I don’t know why it took me so long to listen to Death Cab For Cutie. But Soul Meets Body popped up in my recommendations only a month ago - I hit play and fell in love.

The shimmering indie-pop sound layered over 90s-tinged alternative rock, with beautifully crafted lyrics about love and loss that go right through you - it’s enchanting and soothing, and makes you wistful about things you didn’t you know you felt.

The other standout track is the sparse and tender I Will Follow You Into The Dark, with just lead vocalist Ben Gibbard on his guitar.

There are hints of Ben Folds and Elliott Smith, and despite this being their first album with major record label Atlantic Records, it retains the band’s signature lo-fi vibe.

View Plans on CD, Vinyl and MP3 download at Amazon

Strictly speaking, I don’t wish I’d heard these albums earlier but I do wish I had listened properly. I had absorbed every cadence of John Frusciante’s solo work up until 2009 when he released The Empyrean, and listening back I can’t even think why I wouldn’t have delved as fervidly thereafter.

It took the recent news that Frusciante was releasing another EP under his alias Trickfinger to nudge me back to some of his later albums.

Hardcore acid house fans will tell you Trickfinger is more an ode to the genre than one that treads any new ground, but there are still some Frusciante hallmarks peeking through the album – notably the sequenced synthesizer loops like the ones heard on solo records such as A Sphere In The Heart Of Silence.

Mostly, though, I feel I missed out on time listening to PBX Funicular Intaglio Zone. It’s an album that seems to echo those more experimental early acoustic records – though now with an uninebriated mind – with synthesizers and drum machines rather than purely guitars.

As hi-fi test records, there’s little ground that album in particular doesn’t cover. As an inspiration, musically, I now regard it as one of Frusciante’s most important.

In an age when George Michael, Freddie Mercury and Boy George were all at their peak of stardom, it’s strange to think it took an unknown trio from Glasgow to bring the fight for gay equality into the mainstream pop charts.

Bronski Beat released their debut album Age Of Consent in 1984 against a backdrop of shifting social opinions. In the same year Frankie Goes To Hollywood shocked Radio 1 into banning Relax, Age Of Consent took a different approach.

From the cover notes outlining the struggle for equality (removed for the US version) to the social messages in songs such as Why? and No More War, this album wore its heart, and its causes, on its sleeve.

Age Of Consent reached No.4 in the UK album charts, catapulting lead singer Jimmy Somerville to stardom, and making him an unlikely figurehead of a social movement. Bronski Beat were less durable – Somerville left to form The Communards a year later.

Musically, Age Of Consent is an almost perfect slice of 1980s synthpop. The stand-out track is the disco beat and distinctive keys of Smalltown Boy, but there are other highlights too, the slower-paced Screaming and even a cheesy cover of Donna Summer’s I Feel Love.

Three decades later, the record feels dated, the synthesizer beats tinny and the causes less urgent. To fresh ears, Somerville’s falsetto wails may grate rather than inspire. But at the time, with Margaret Thatcher waging war on any minority group standing in her way, Age Of Consent was a superb example of how protest pop music should be done.

It’s easy to forget how far things have come. Times have changed, and at least a small part of that is down to Age Of Consent.

View Age of Consent on CD and Vinyl at Amazon

Something To Tell You by Haim - Kayleigh Pavelin, designer

Haim released their first album Days Are Gone in 2013, so Something To Tell You has been a while coming. If you haven’t heard of them, they’re a multi-talented, award-nominated band made up of three sisters – Alana, Danielle and Este Haim. Each is proficient with a number of instruments, a talent they’re not afraid to show off in their performances.

Their latest is a melodic combination of soothing vocals and guitars with tales of heartbreak and betrayal. Like Days are Gone, the three sisters adopt the same style of rhythm throughout, but the album focuses less on the evolution of the sound and more on the progression of the band’s life experiences.

The first track Want You Back offers a sneak peak into their story and feels like an explanation of what the rest of the album holds. The order of the tracks tells the story of how a relationship appears to have reached its end. It feels personal, as if drawing on the band’s own experiences.

Kept Me Crying is a single that puts a glittery sheen over the bad in classic Haim soft-rock style. One of the last tracks, Right Now, bring us back full circle. The clean-cut rhythm gives the impression of a transition back to the relationship with a happy ending - but the juxtaposing lyrics hint at a different story.

This is one I’m looking forward to giving a more thorough listen and delving into the story behind the vocals.

View Something To Tell You on CD, Vinyl and MP3 download at Amazon