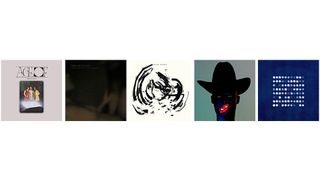 We have tracks for every occasion, songs which perhaps capture a moment or a relationship. But it is the album that defines us as music fans as much as it does the artist who created it.

More than a collection of songs, the album is an arc, both musically and often in terms of narrative, that elevates each track by virtue of those that surround it – and the telling of those stories is equally a stern test for your system as being the ever long draw for our affection.

Saturday 13th October marks the first ever National Album Day, a celebration of the medium's 70-year history, and a fine opportunity for us to pick some of our favourites from this year we've been using for testing.

So here are ten records that'll tell you all you need to know about your speakers, and that prove the album is still the pinnacle of musical expression in 2018.

The trio of saxophonist Jack Wyllie, electronic producer and experimental synth player Luke Abbot and drummer Laurence Pike craft a psychedelic landscape that is at once sonically dense and gloriously fluid.

Though with a sound that is distinctively their own, it requires the same of your speakers as any great jazz recording: expert timing to navigate obscure rhythmic patterns, space for each instrument to articulate its lines and dynamic versatility to capture the nuance and unpredictability of its improvisation.

Listen to New Hymn To Freedom on Spotify and Tidal

There are few voices in British music so distinctive as Aidan Moffat's. His work with Bill Wells set a tone for lilting verse complemented by complex musical accompaniment, and it is one continued through this collaboration with Scottish guitarist RM Hubbert.

A record that feels often as if held together by a thread – almost horizontally laid back though never slack – its combination of percussive acoustic guitar lines and rhythms built as collage rather than driven by a traditional kit are a test in organisation as much as Moffat's vocal requires full body and sensitive dynamics to be brought fully to life.

Listen to Here Lies The Body on Spotify and Tidal

Age Of by Oneohtrix Point Never

Age Of is Daniel Lopatin's eighth studio album under the moniker Oneohtrix Point Never, and proves to be his most accessible to date.

That’s in large part due to its collaborative palate, which stems from Lopatin’s recent production gigs. James Blake (the album’s co-producer and mixer), Anohni (whose solo 2016 album Hopelessness Lopatin co-produced) and experimental artist Prurient each leave considerable mark on a record that spans genres, is exploratory in its instrumentation and idiosyncratic in its use of rhythm.

It takes a system with fine sense of timing and dynamics, and plenty of textural insight to release Age Of's boundless sonic potential.

Buy Age Of from Amazon

Listen to Age Of on Spotify and Tidal

While Koze often turns to muffled kick drums and muttered vocals, there are also plenty of crowd-pleasing riffs and catchy basslines. Despite the laid back style the production is meticulous with crunchy percussion and stirring dynamics sure to keep your system on its toes. Plenty of panning effects add an extra element for headphone listening, too.

Listen to Knock Knock on Spotify and Tidal

At once seemingly minimal yet with deeper listening revealing auxiliary synth strands without which the record would lose its sense of euphoria, it is a record deserving of a detailed pair of speakers also possessing the dynamic range to accentuate those leading notes that drive Hopkins's compound rhythms.

Listen to Singularity on Spotify and Tidal

Time Will Die and Love Will Bury It by Rolo Tomassi

It’s not the sort of music that will suit all tastes, but for those with a penchant for complex rhythmic patters and that juxtaposition of haunting vocals and acerbic caterwauling it’s quite the treat. Of course, it'll demand excellent dynamics, pin-point timing and plenty of punchy bass to feel its full force.

Buy Time Will Die and Love Will Bury It from Amazon

It’s not clear where Arnalds’ musical skill ends and the software begins, but the result is an atmospheric, rhythmically complex album packed with dense but emotion-tugging compositions.

Listen to re:member on Spotify and Tidal

All Melody by Nils Frahm

Nils Frahm has long investigated the granular detail of timbre, natural reverb and the recording of sound; his live album Spaces, for example, was captured variously by reel-to-reel, cassette, multi-track recordings and even some straight from engineers' mixing desks.

Much of All Melody is bathed in the surroundings of his Funkhaus studio's reverb chamber, though his pursuit of ambient tone also led him to setting up a quasi-studio in the dry well of a holiday home in Mallorca.

Choral sections and pulsing bass notes are a test for your speakers' dynamic range and low-end control, but any lack of detail or spaciousness will deny you experience of the luscious natural reverbs Frahm has cultivated for this record.

Buy All Melody from Amazon

Listen to All Melody on Spotify and Tidal

Young Fathers softened some of the edges with this, their third studio album, but the result is no less arresting.

Cocoa Sugar could perhaps be described as much as an experimental electronic record as a straightforward hip-hop album, driven by often off-kilter rhythms and served with a generous helping of low-end that your speakers will have to keep taut as well as delivering textural insight.

Listen to Cocoa Sugar on Spotify and Tidal

Call The Comet by Johnny Marr

Call The Comet serves only to bolster Johnny Marr's enduring reputation as one of Britain's finest and most influential guitarists and songwriters.

Packed full of trademark riffs, indelible melodies and snappy rhythmic sense, it is both a lesson in songwriting and homage to the Mancunian's mastery of timbre and tone.

Your speakers will need to match that with granular detail, as well as possess the vibrancy to breathe into these tracks the life they deserve.

Buy Call The Comet from Amazon

Listen to Call The Comet on Spotify and Tidal