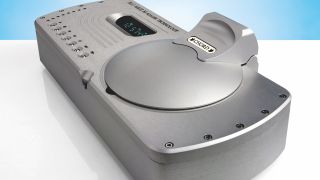 Since the format first landed in 1983, CD has had a huge impact on how we consume music and over the years, it's fair to say we've been spoiled by some truly stunning CD players.

To help us celebrate British Hi-Fi Week, we've been through the archives to track down some of the best CD players of British descent to pass through our test rooms over the last 36 years.

There are some serious classics on display here, from exceptional entry-level players to outrageously entertaining high-end machines.

To say the Meridian MCD bore a striking resemblance to Philips' CD100/CD101 players is an understatement.

Meridian took the shell of Phillip's player and painted it graphite grey. But that's where the similarities end. The MCD's innards were a completely different matter as Meridian rebuilt the output stage and tweaked the servo and error-correction systems.

This resulted in a player with a sweet and musical sound, tidy with low frequencies and good with scale. Like many early efforts, it had basic features (no remote, for instance), but the sound was its main appeal.

Philips and Sony might have invented the CD player, but it was Meridian who executed it perfectly during its formative years.

Cambridge Audio's CD1 cost a fortune when we reviewed it in 1986. At £1500, it was double, if not triple the cost of most other players on the market at the time.

It was also the first player to be split into two separate boxes, the upper half was where the disc tray and power supply were located. The bottom half housed the DAC.

It featured three 14-bit DACs (with oversampling) per channel. Two worked together for speed and accuracy, while the third smoothed out any errors.

The result was a broad soundstage with great depth, space and loads of detail. It might have been pricey, but it was head and shoulders above other players at the time.

Arguably the best value premium player of its time, we found Meridian's 200 CD transport to have a "distinctly extrovert" sound when we first heard it in 1991.

The soundstage was wider, deeper and more forward than its peers. It was bold in how it attacked a piece of music, and was capable of handling busy tracks without tripping over itself.

It was excellent on its own and even better when partnered with the half-width 203 DAC (pictured above). The clarity of the 200 was a good match for the warmer sensibilities of the 203 - together they boasted an impressively musical partnership.

Based on Arcam's landmark Alpha One, the Alpha 7 left the competition in its wake with a Best Buy win in 1996. It was budget king and dominated Group Tests and rival Japanese players for generations. Not many British-made players can claim such success over the years.

The Alpha 7 featured a modular design, so an upgrade path was possible. A new DAC board and a quick change of badge and your Alpha 7 could be transformed into an Alpha 8.

It had a smooth, mature and relaxing sound, which made for treble that was softer than other players. But the sound had good weight to it, which helped some tracks sound big and substantial.

On the outside, the extra cash bought you a badge change. Otherwise, it had the same connections, motorised transport and almost tablet-sized remote.

The real evolution was the 24-bit upgrade. It continued Meridian's tradition of belting out rich and melodious sound.

Though previous Meridian players faltered in terms of muscularity, the 508.24 liked to rock. It produced a good sense of energy with fast, controlled bass.

Feed it good recordings and the 508.24 was an ideal premium CD player for those who liked a lush and punchy sound.

This Naim emerged in 2003 and was part of our reference hi-fi system for the best part of a decade.

Made for those who wanted the best sound no matter the price, it was a two-box combo that defied the established wisdom of keeping delicate circuitry separate. Here, the transport and DAC were in one box with the power supply hidden away in the other.

The Naim pairing needed a lot of running in – a week! – but every minute was worth it. The pair delivered a stunning, finessed sound with great timing and attack. When in full flow, the Naim performed on a completely different level to to anything else at or around the money.

Quad's 99CD-P was a very quirky (and memorable) effort.

Accessing inputs or adjusting the volume could only be done with the remote, and the display was so dimly lit you could barely see what was on it.

It was the first CD player we'd seen that could also be used as a preamp, but only with sources such as a digital recorder or digital radio tuner.

Nonetheless it was a powerful performer, with plenty of punch and drive but also capable of producing a sense of warmth too.

An odd, but hugely impressive CD player that summed up the eccentricity of the Quad brand nicely.

Best known for its amps, Exposure had shown promise with an early iteration of the 2010, but it was the 2005 vintage that saw performance reach a new high.

Compared to other CD players it looked dated, but improvements had been made over the original. The controls on this version were more precise and the casework gave the player more of a desirable sheen.

This player was all about unearthing the emotion from the music. With a fast and punchy sound, it worked well with all kinds of music, laying bare the detail and intricacies within a track.

It made listening to music fun. That's why it was one of the most entertaining and musical players of its time.

Could any CD/SACD player be worth £33k? If you were lucky enough to hear the Scarlatti back in 2008, you'd know the answer - a resounding yes.

Not only was the price unusual, but so was the design. The Scarlatti wasn't just one box, but three: a transport, a DAC and a clock unit more often found in the pro world. The clock ensured the other two worked in perfect harmony.

Stick a CD in and you were treated to an unbelievably transparent performance that was as insightful as they came, with staggering amounts of detail and a fine understanding of complex, multi-layered tracks.

A multiple-award winner, Roksan's M2 CD (along with its matching amplifier) dominated better-specc'd rivals for years after it first came out.

That was principally down to how good it sounded. It was full of character, but also combined refinement, bite and rhythmic ability better than any of its closest rivals.

Its build and design certainly facilitated its sonic performance. The CD transport was softly suspended, a move which minimised the "amount of vibration fed into and out of the mechanism".

No other player in its price range could budge it for a long time. A truly captivating machine.

The SE2 looked exactly like the original, but brought updates that softened the player's more temperamental nature.

It was less fussy with discs and Cyrus claimed it could more accurately read a compact disc's data. It had an excellent a sense of organisation, as well as musicality and punch that was very much in Cyrus mould.

Like the company's other products, an upgrade path was possible. Slot in a PSX-R power supply and an extra dose of bass weight, authority and finesse were yours for the taking.

Chord's best known for its Award-winning DACs, but that's one component you won't find inside this stunningly musical high-end CD transport.

What it does boast is a high powered upscaler that features lots of clever processing tricks to extract CD's 16-bits of data as accurately as possible.

The end result is a performance that's exceptional at insight and dynamics.

Combine it with the Chord's own DAVE DAC and we doubt you'll find a better-sounding set-up.

10 of the best British turntables of all time