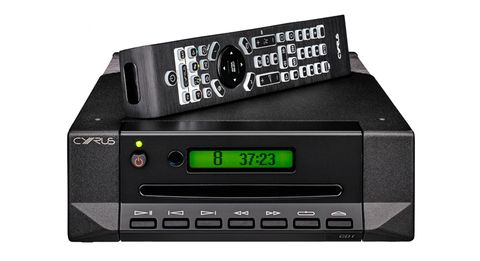 A remarkably talented and enjoyable CD transport for the money

The CD t is the latest addition to Cyrus’s long line of highly accomplished products. It’s a CD transport, rather than a CD player, meaning it will simply read the data on the disc, requiring an external DAC to handle all the digital-to-analogue conversion.

It’s ideal for those who already have a hi-fi separates system, and simply want to upgrade the CD source. All you’ll need to complete the set is a DAC.

The CD t uses high quality components and technology – such as Cyrus’s own Servo Evolution disc-reading software – featured in the flagship CD Xt Signature (£1,750), so it’s safe to say we already have a certain level of expectation for this more affordable transport.

Florence + The Machine’s You’ve Got The Love sounds crystal clear, astonishingly nimble and with a staggering amount of detail. The CD t breezes through the upbeat rhythm, while Florence Welch’s soaring vocals sound refined and smooth with no hint of clipping or brightness.

The Inception soundtrack shows off just how nuanced and subtly dynamic the CD t is. It’s not just about the deep bass, but also about revealing the varied textures and layers of that rumbling bass note.

It’s a remarkably precise performer, ripping through the rapid-fire drum intro on Van Halen’s Hot For Teacher with effortless speed and accuracy. Each instrument is easily placed in the spacious soundstage, and we love how musical and fluid the transport sounds.

Despite fierce clarity and control, the CD t never sounds clinical or forced. It’s a truly accomplished performer that you could listen to endlessly.

If you’ve seen one Cyrus product, you’ve seen them all. The company’s iconic half-width, die-cast aluminium chassis design hasn’t changed in more than 20 years. The CD t’s sturdy build is impeccable, the buttons responsive and logically placed, but it is starting to look rather old-fashioned now.

The transport uses a slot-loading design, and the CD t grunts and grumbles noisily when fed a disc. It’s silent during playback, though.

Its black-on-green display also looks dated. Though it’s informative and easy to read, you really only need to know the track number and time remaining on a transport – we think a product with Cyrus’s pedigree could do with a fresh redesign.

The remote control, on the other hand, feels modern and slick. Laden with more buttons than needed for a CD transport (so it can be used across Cyrus’s range of products), it’s fast and intuitive with motion-sensitive backlighting. Be warned though, it lights up if you move even slightly.

Connectivity is at a minimum here. There are two digital outputs – optical and coaxial – but alongside the standard MC-BUS control connections, that is it.

There’s also no sign of the PSX-R socket for the add-on external power supply that’s long been a natural upgrade path for most Cyrus products.

Like the CD Xt Signature, Cyrus feels that the internal power circuitry has been improved to an extent that an external power supply is no longer needed.

And the results suggest they’re right. The CD t is an exceptionally talented transport for the money.

Yes, you’ll need to add a good standalone DAC, but the CD t is worth the extra trouble. Its level of transparency, clarity and insight is unrivalled at this price, and is an effortless and musical listen.

See all our Cyrus news and reviews

See all our CD transport reviews