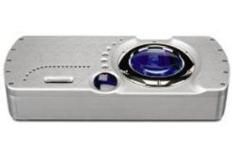 The arrival of computer-based products as audio sources means that good quality outboard digital-to-analogue conversion is once again on the agenda. Chord has enthusiastically jumped on the bandwagon with not one, but two standalone converters.

The QBD76 and its cheaper sibling, the Chordette Gem, are the first DACs we've come across that accept a digital Bluetooth signal from say, a phone, laptop or PDA, and number crunch it to produce music.

It's a shame Apple's iPhone doesn't offer this feature yet, though many other Bluetooth-equipped phones do – Chord thoughtfully provides a lengthy list of compliant phones at the back of the instruction manual.

Let's not underplay this feature. In our experience, for the first time you can start to think about using a music phone as a source for a hi-fi. And it's proper hi-fi sound, too, where you can talk about subtleties such as sound-staging and dynamic integrity without sounding silly.

Exquisite sonic performance
While the computer audio connectivity will grab the headlines, it's this DAC's sonic ability that makes it so special. The £400 Chordette Gem will give you the same connections, but in no shape or form does it come close to matching its big brother for outright sonic quality.

The cheaper product uses an off-the-shelf 24-bit DAC, whereas the QBD76 uses a Pulse Array DAC. This is a proprietary system that's programmed on to an FPGA (Field Programmable Gate Array) – a very powerful programmable integrated circuit.

Chord claims the resolution to be as good as CD can get, and connected to a high-quality transport – we used those from Cyrus and Classé – it's hard to argue. This DAC produces some of the finest digital sounds we've ever heard.

The QBD76 doesn't always sound easy on the ear like Unison Research's Unico CDE does; neither does it produce rich-sounding or warm results. No, it's all about fluidity, naturalness and the kind of cohesion that only the very best turntables can manage.

Most digital players, even great ones such as the Naim CDS3/555PS we use as reference, sound slightly stilted in comparison.

It's expensive – but it's worth it
We have to give a special mention to the QBD76's bass performance. It's as powerful, articulate and textured as we've heard from digital.

Listen to Like A Dog Chasing Cars from The Dark Knight OST and the authority, control and insight at low frequencies are extraordinary. That the insightful treble and superbly nuanced midrange aren't overshadowed says much for this DAC's overall performance.

Such a widespread of talents means musical genre doesn't come into it: this DAC is as happy pumping out the chaotic hip hop of The Roots as it is finessing with Adele's debut set, 19.

Four grand is a lot of money for a DAC, but this is an awful lot of DAC for the cash when you consider its finish, build and stunning sound quality. If you have the money, buy with confidence.