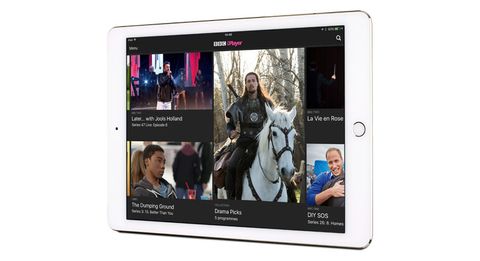 With quality programmes, downloadable shows and a great interface, BBC iPlayer is the best video-on-demand service out there

It’s free (although you need a TV licence). It lets you download programmes for offline watching. And there are no ads. BBC iPlayer, in our opinion, is currently the best catch-up service in the world.

Even without considering all the broadcast TV and radio the corporation provides across many channels, BBC iPlayer is almost worth the licence fee on its own.

Missed the last episode of Doctor Who, or want to catch up with a week’s worth of MasterChef? BBC iPlayer is your answer. It was already a great desktop service when first introduced in 2007, and it’s even more excellent in its incarnation as an app for your smartphone and tablet.

BBC iPlayer’s trump card is the ability to download shows onto your smart device for offline watching - you can store them for up to 30 days.

So if you miss a show, you have plenty of time to catch up at your convenience. Most shows are available for 30 days after airing, but downloading them gives you that extra flexibility.

This is great for long train journeys, if you’re travelling out of the country (iPlayer is only available in UK), or can’t get any internet or data signal – in fact, it’s the ultimate portable video app.

While you can watch shows on 4G (which we’d recommend if you have unlimited data), you can only download on wi-fi. There’s a bar that helpfully shows how much storage space the show takes up, as well as how long it will take to download.

Handy if you’re about to run out of the house but really want to watch last night’s Only Connect on the train.

While Netflix now lets you download certain shows, it's nowhere near the breadth and scope offered by iPlayer.

BBC iPlayer’s grid layout is neat and stylish, with photos and a blurb giving you a snapshot of the shows on offer. Scrolling through the service is a swift and smooth process, regardless of what platform you’re using.

The service highlights programmes in a dynamic way, too, mixing documentaries and comedy panel shows so that there’s something for everyone.

You can browse programmes by channels, categories, schedules or most popular, or simply search for them. You can also add shows to your Added list (formerly Favourites) so new episodes are easy to access.

Each update to iPlayer has made it fresher and more intuitive to use. A new addition is the Watching feature, which keeps track of what you’ve viewed, so you can start from where you left off or continue on a different device.

There’s also a five second rewind so you can remember what just happened.

And, if you’re watching a show live on the TV app or desktop version, but missed the first crucial minutes, you can rewind and start from the top.

You'll soon need to create a BBC ID account to watch any iPlayer content, but it's free to sign up, and staying logged in at all times gives you plenty of perks such as keeping your favourites list and watching history synced across all devices.

With increasingly high-quality screen resolutions on smartphones and tablets, both standard and high-definition shows on iPlayer look fantastic. BBC HD (720p) content is crisp and detailed enough on smartphones, but it looks especially engaging and dynamic on bigger screens.

We would urge you to play HD whenever you can, though – it looks excellent.

The BBC also provides accessibility features for the visually impaired or hard of hearing. Many programmes will have icons that tell you whether audio description (AD) or sign language (SL) options are available.

The sound is as good as your device and headphones will allow.

Use a good pair of headphones, such as our old favourites the AKG Y50s (£59), the Beyerdynamic Byron (£45) or the Sennheiser Momentum 2.0s (£199), and you’ll be treated to clear and expressive dialogue and a great sense of drama.

The BBC has added a fun element too, with a volume control bar that goes up to 11 – a nod to the famous amplifier scene in the 1980s mockumentary This Is Spinal Tap.

BBC iPlayer isn't entirely free anymore: you are now required to pay the licence fee to legally watch programmes on catch up and live.

But when the fee amounts to less than 40p per day, and you look at the incredible range of programming available from the BBC, we'd happily carry on paying just so we can see more Planet Earth.

So what are you waiting for? You have a new app to download.