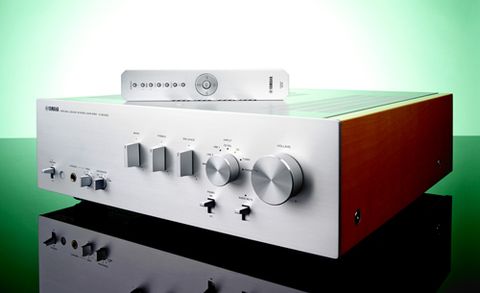 A big, powerful, attractive amp, but the overly relaxed attitude puts it behind similarly priced rivals

If we tested based on looks and build alone, the Yamaha A-S2000 would walk away with the full five stars.

Twist the volume dial and it’s reassuringly weighty. The same can be said of the tone and balance controls. The design isn’t as minimalist as some rivals, but we love extra dials when the machine is this well made.

The power toggle goes flick, the input dial goes clunk: putting on music becomes a satisfying ceremony not unlike preparing for take off.

Oh, and it’s also built like a brick house. This is a solid, hefty amp, weighing nearly 23 kg. Talk about perceived value.

The remote control is just as encouraging: it’s a lovely wand of ergonomic plastic and metal with a simple layout that won’t make you want to fling it at the wall.

It’s time to stop fondling the machine. We settle down to listen, and get started with The XX’s Islands. It's one of our favourite tracks to trip up machines with poor timing and dynamics – but the Yamaha gets by just fine, sounding authorative and powerful.

The amp sounds every bit as muscular as it looks. Armed with 100W per channel, the Yamaha puts out a great sense of scale. Load up something foreboding like Hans Zimmer’s soundtrack from The Dark Knight, and the introduction sounds effortlessly epic.

It’s a relaxed sound, however, and doesn’t quite convey the sense of Gotham City’s impending plight. In fact, whatever we listened to was rich and weighty, with a veneer of smoothness and refinement over everything.

This goes well with Norah Jones, but not so much with Daft Punk. Sometimes you just need a bit of bite and bile, and this Yamaha is too relaxed to give it.

Push the A-S2000 hard, and the occasionally thin treble gets a little sharp. This is a laidback amp – or a lazy one – that’s more suited to casual background listening.

Plug in some headphones, and it’s a similar experience. It’s a capable but overly relaxed amp that doesn’t try hard to excite you. If anything, the presentation is a touch thinner than when put through some speakers.

The Yamaha has a built-in phono stage, and can handle both moving magnet and moving coil cartridges, and switching between the two is a breeze. The simple toggle on the front of the machine means there’s no need to open the lid and poke at the circuit board.

Our findings are consistent as we switch over to some turntables. While MC is punchier and weightier than MM, the overall character of the amp remains the same.

The Yamaha A-S2000 has a lot of things going for it, but an exciting sound is not one of them. As much as we love the look and feel of the machine, there are more entertaining amps for the money.