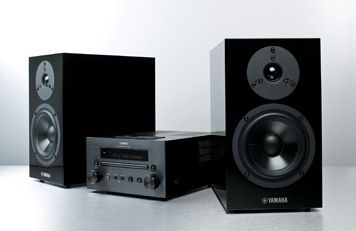 Vastly improved over the original, but it still doesn’t excite us enough for five stars

In March this year Yamaha launched the MCR-550, a system specifically designed to beat the Denon D-M38DAB. It didn’t quite manage it, but rather than simply give up, Yamaha decided to tweak the system and have another crack.

The good news is that the MCR-555 is undeniably better than the MCR550. The bad news is that it’s still not quite good enough to topple the Denon D-M38DAB.

Our biggest criticism of the MCR-550 was the ‘flabby and imprecise’ NS-BP200 speakers, and Yamaha has sought to make the biggest changes here.

The boxes look the same, but the new NS-BP300s have been tuned to offer tighter bass and more accurate rhythm, as well as a wider soundstage and greater resolution.

Charmingly nuanced performance
The old model already excelled at reproducing vocal-led acoustic and piano numbers, such as Regina Spektor’s Samson, and the extra detail and definition of the new speakers makes for a charmingly nuanced and emotional performance.

The general richness and fluidity of the character remains, though, making it a beautifully silky delivery.

The thing is, while rhythmic accuracy and punch have improved, the Yamaha’s reproduction of frantic, beats-based tunes such as Battles’ Ice Cream is still markedly less action-packed and exciting than the Denon’s.

It doesn’t deliver notes with quite the same conviction, and simply isn’t as engaging. Also, while the bass is no longer flabby, it still lacks a touch of attack and clarity.

Flexible speaker positioning
Experimenting with different speakers proves that the NS-BP300s aren’t holding back the CRX-550 as the NS-BP200s did (they’re more flexible over positioning, too), but a switch to top-class £150ish speakers will still reap rewards.

Even then, though, the Denon proves the more agile and exciting performer. That’s not to say you should dismiss the Yamaha. It’s a delight to own: brilliantly made, stylish, and the symmetry of the fascia and ultra-slim (but sturdy) disc drawer make for appealing aesthetics.

More importantly, it trumps the Denon by having a dedicated dock on top that takes a digital signal from your Apple device – and that’s got to be better than having a cable trailing from a USB socket.

The style gurus out there will love it, then, as will those who listen almost exclusively to stripped-back recordings or who seek fluidity and refinement over all else. However, those with broad music tastes and a penchant for excitement would still be better off with the Denon.