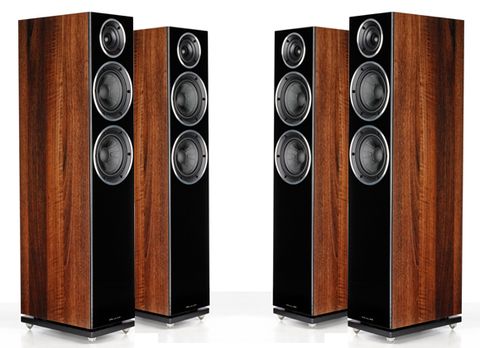 They’ve lost a star, but the Wharfedales are still speakers to be reckoned with

Earlier this year the Wharfedale Diamond 230 loudspeakers received a five-star review from us. And yet already they have had a star taken from them in the face of stiff new competition.

That doesn’t mean these Diamonds 230s are done and dusted – far from it. If you’re on the prowl for talented floorstanders, compact in size but room-filling in sound, these demand your attention.

Big and burly, the Diamond 230s’ all-encompassing sound gives the impression that the 95cm tall, 32cm deep cabinets are larger than they are. The choir’s vocals in Macklemore and Ryan Lewis’s Wing$ fill the soundstage with dramatic crescendos that not many rivals can match.

Their powerful persona isn’t at the expense of agility, either – the 230s are saturated with decent helpings of drive and punch. Their neutral tonal balance is convincing, the bass deep and powerful, and the treble clear and accurate.

Wharfedale has worked hard on the crossover to improve integration between the drive units and we think it has paid off – both work close-knit with the midrange, which is pleasing.

Vocal delivery is smooth, focused and well projected. You can hear the subtle dynamic lifts in Macklemore’s raps, and his vocal outbursts are explosive.

We find the Q Acoustics 3050s more precise in the way they time and place notes, though the Wharfedales’ manner is affable: instruments have natural warmth and sweetness. That’s not to say they’re too rounded or without bite – each sound is solid and forceful.

Play Sergei Rachmaninoff’s Rhapsody on a Theme of Paganini and the piano is weighty and spry, the varying intensity of every struck note flagging the Diamonds’ dynamic know-how.

But even then, the Q Acoustics are more subtle. They grant more texture to the keys, revealing more harmonic information.

We find the 230s work best with a little room around them – at least 30cm from a back wall and double that from any side wall. Angling them slightly towards the listener tightens the stereo image, even if it gives away a little soundstage width.

Thanks to their unusual bass tuning, introduced in the Diamond 100 series, positioning isn’t set in stone. Instead of having a front or rear bass reflex port, the Wharfedales fire downwards into a small gap between the cabinet and plinth.

This makes them more flexible with placement than most rivals, and also reduces any audible chuffing noises.

Thankfully, the 230s haven’t taken a lead from the Diamond 100 series’ finish, which provoked a few grumbles about its haphazard quality. The new cabinet settles any moans.

Internally, in addition to the new cabinet and upgraded crossover there’s also a bigger magnet on the bass driver’s motor system, which makes the speakers easier to drive and improves responsiveness.

The tweeter, meanwhile, remains the same, sitting in a deeply dished waveguide which helps efficiency.

We really like the Wharfedale Diamond 230s. They’re talented performers, and for the money you’re getting a great deal. These are good-value speakers whose versatile nature wil suit many a room and set-up.

And now that Wharfedale has sorted out its build quality issues, we have no problem doling out the commendations. If you’re in the market for a budget floorstanders, these thoroughly deserve an audition.