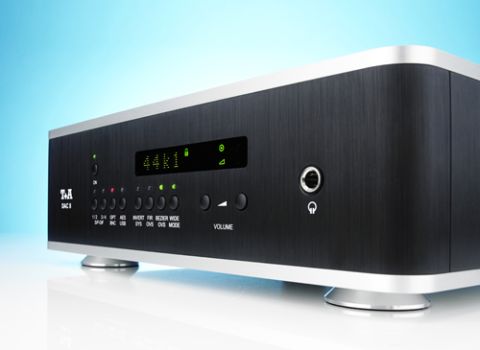 The DAC 8 is beautifully engineered and usefully equipped, but most of all – it sounds great

We’ve always been surprised that T+A hasn’t made a bigger impact in the UK market.

On the rare occasions that we’ve reviewed the German manufacturer’s products, we’ve always been impressed by their engineering and performance. We feel similarly positive about the new T+A DAC 8.

What is the DAC 8? As the name implies it’s primarily a digital-to-analogue converter. Look at the densely packed rear panel and you’ll find five coaxial inputs, including a BNC option and a lesser-spotted AES/EBU socket, all capable of accepting 24-bit/192kHz signals and a single optical input (limited to 24-bit/96kHz, as is usual).

There’s a USB port too, of course. The DAC 8 has a single socket, which can be set to either USB 1.0 or USB 2.0 mode. Leave it on the default USB 1.0 setting and you’ll get broader compatibility, although the input resolution will be limited to 24-bit/96kHz.

USB 2.0 mode (switchable via the front-panel controls) means downloading dedicated driver software for your Mac or PC. It does, however, raise the input limit to 24-bit/192kHz and bring asynchronous operation in the picture.

Asynchronous USB is when the internal clock in the DAC – usually a higher-quality component than its equivalent in a typical computer – takes charge of the timing of the data flow. In our experience the result is usually a better sound.

However, the DAC 8 is more than just a converter. It has a built-in volume control and balanced XLR and single-ended analogue outputs too. This means it can also be the preamp in an all-digital system. Connect it to a stand-alone power amplifier or a pair of active speakers, and off you go.

This kind of approach simplifies the signal path: the signal doesn’t need to travel through a couple of meters of interconnect and through the circuitry of a dedicated analogue preamp – all of which holds the promise of better sound quality. It reduces the cost, too. It’s not often a possible improvement of sound goes together with a lower price tag.

Finally, the DAC 8 also has a headphone output. For years most manufacturers have treated these like afterthoughts, but the emergence of desktop audio means such an output is vital.

Spending almost £2000 to sit at a desk listening to your computer through a pair of headphones might seem excessive, but there’s no denying that the sonic results can be spectacular.

True to T+A’s traditions the DAC 8 is immaculately made. It’s a small, relatively light box, measuring just 9 x 27 x 27cm (hwd), but it still exudes quality and class. Everything fits just so, and works with precision.

The front panel display is clear enough to be seen from a distance, although we think a product of this type could do with a better remote control than the cheapo item the company has supplied. The only good thing we can say in the handset’s favour is that it’s easy to use.

Once up and running we’re happy with what we hear. That’s once we’ve taken the time to fine-tune the sound with the right filter setting. As is the fashion, T+A has equipped the DAC 8 with a choice of digital filter settings.

There are four options. Option 1 is called FIR and concentrates on delivering a flat frequency response. The second is a variation that sacrifices just a little frequency range linearity for an improvement in the way the DAC handles transient signals.

The remaining two options are Bézier type filters. Filter 3 tries to mimic the response of an analogue system, while option 4 is described in the manual as delivering the ‘perfect reconstruction of the original music signal’.

This description made us wonder why T+A bothered with the three other settings, even more so when we started listening and formed a strong preference for Filter 4 too.

Filters sorted, the DAC 8 produces an unassuming sound that’s about as un-showy as it gets. There’s no booming bass here. Or brash treble. It’s just a beautifully balanced sound that brims with organisation and finesse.

If anything, the T+A underplays punch and large-scale dynamic shifts just a little, but never so much as to detract from the excitement or drama of the music.

Rather than focussing on the slightly polite presentation our attention is drawn to the wonderfully fluid way this DAC delivers the dynamic swings of Tchaikovsky’s 1812 Overture, and the way it manages to keep everything organised, even when the piece gets demanding.

Tonally, this DAC is spot-on. It’s neutral without the dryness of sound many such products normally impart, and sounds are rendered with precision: the leading and trailing edges of notes drawn sharply, but without any form of hardness. We like the stereo soundstaging too, it’s nicely layered and laid-out with care and composure.

Move on to something demanding such as Massive Attack’s Heligoland and the T+A takes it all in its stride. It doesn’t emphasise rhythmic aspects of the music as much as the pricier Naim DAC, but it maintains a firm grip of the rhythmic structure of the music, giving it plenty of drive and stability.

The sound is immensely clean and clear, yet in our reference set-up of Naim NDS/555ps streamer, Bryston BP26/4BSST2 pre/power and ATC SCM 50 speakers there’s never the feeling of being overly analytical either.

Try more delicate music such as Sufjan Stevens’s Illinois and the T+A responds accordingly, delivering this beautiful album with all the delicacy and dynamic sensitivity it deserves. The vocals in particular are rendered with convincing emotion and a lovely amount of texture.

We tried the DAC 8 as both a stand-alone converter that feeds straight into our Bryston BP26 and as a digital preamplifier, where it sends the signal directly to the Bryston power stage. All it takes is a flick of a switch on the rear panel to turn the outputs from fixed-level to variable.

While the theory of using a unit such as the DAC 8 to feed directly into a power amplifier is a great one, in use things don’t always turn out well. Usually we find that any gains in transparency and detail are overshadowed by a loss of solidity, drive and punch.

Thankfully, that isn’t the case here. The DAC 8 worked really well directly into the power amp, and simply delivered an even higher standard of transparency when configured in variable mode.

If you’re looking for a fully featured DAC at this price level have a listen to this one. We doubt you’ll be disappointed.

The DAC 8 is an unassuming unit. It isn’t the type of unit that necessarily grabs your attention on a short demo, but live with it over days and weeks, as we have, and it becomes clear that this T+A product is something special.

Its strengths of balance, cohesion and insight are exactly those that hold long term appeal – so it’s the kind of product that will reward the listener for years to come.