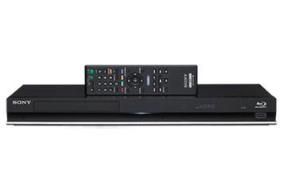 Blu-ray player Product of the Year 2010

£230 for a 3D Blu-ray player, this early into the format's life, seems astonishingly cheap. It's not like that's an online retailer's discounted price, either: it's what Sony Centres are charging.

True, the Sony BDP-S570 is a rather unexcitingly styled unit, with a lip at the bottom that we're not entirely keen on, but that fades to insignificance in the face of a spec that includes wi-fi for network streaming and web features (including BBC iPlayer), as well as 1GB of internal memory.

It's significantly quicker at loading discs than its rivals, too, regardless of the format. What's more, it's quite comfortably the best performer we've seen at this level. Considering it's also one of the cheapest in its price-group, that's a pretty impressive feat.

Realistic depth, crisp detail
The BDP-S570 produces the most genuine and believable 3D pictures we've yet seen. Where some players produce pictures that can look a little like layers of flat objects, the Sony is more whole and solid.

Play Ice Age: Dawn of the Dinosaurs and you don't get a cut-out of Manny stuck on a background, you get a woolly mammoth with a palpable roundness and size.

It's an altogether more crisp and detailed image, too, and the 'S570 retains much of its sharpness during motion, although we reckon this is an area that will see further improvement in future generations of players.

Motion tracking is more solid when you switch to the standard Blu-ray of Green Zone, which is also afforded a perfectly judged colour palette and insight that the other players here can't quite bestow.

Combined with Paul Greengrass' trademark gritty direction, these qualities equate to a vision of Iraq that has astonishing detail and realism.

Fine DVD upscaling too
When asked to upscale a standard-definition DVD, the 'S570 is more than happy to oblige with a nicely sharp and balanced picture.

True, it doesn't quite manage to find the very finest of details, but the overall stability and control of the picture is mighty impressive and it's as good as any of its three rivals in this test.

To cap it all off, a spin of Elton John's Live from Madison Square Garden Blu-ray proves that the Sony is a great-sounding player, offering punch, weight and solidity without losing refinement; it's a really nimble, expressive and full-bodied sonic delivery. Oh, and while we're talking audio, it's worth mentioning that the 'S570 will even handle SACDs.

Our one reservation is the lack of a secondary output for HD audio, so owners of last-generation receivers will only be able to get standard-def sound with 3D. If you can deal with that, this is a great way into 3D.

Watch our Awards video review of the Sony BDP-S570