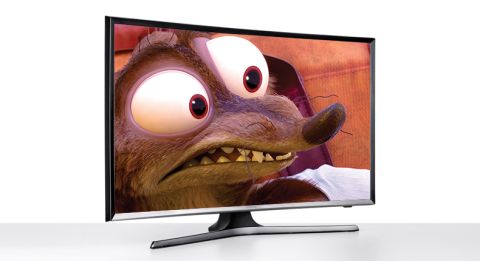 Yet for the past two years, the top brands seem to have settled nearer the £400 figure. Price drops have to cease somewhere, after all.

With the spotlight on bigger screens and growing accessibility of 4K, you could say humble TVs like the UE32J6300 (the smallest of Samsung’s top Full HD ranges) have been sidelined. Like the swings when the funfair comes to town.

But they still live and breathe, and Samsung is trying to keep an air of modernity around this one by making it curved. It’s subtly done here – the frame actually seems more curved than the screen itself – and has more of a case for consistency in its J6300 range, which goes up to 55ins, than it does for ‘immersion’. It looks smart, though.

But at £380, it’s not exactly a bargain, especially when you consider our favourite small TV of 2015, the 40in Panasonic TX-40CS520, matches it for price. But if size is swaying your pocketbook, the UE32J6300 throws everything at you.

There’s a tick in every box when it comes to catch-up TV – BBC iPlayer, ITV Hub, All 4 and Demand5 are all out in force – and Amazon Instant Video, Netflix, and YouTube join more obscure streaming titles like MUBI and BFI Player ­– ideal for movie lovers.

So unless you have discs itching to be played, a Blu-ray player isn’t essential to make the most of this Samsung. Though of course they, along with games console and hard drives, can stick into the Samsung’s inputs: four HDMIs, three USBs and legacy analogue connections.

An optical output caters for a soundbar, a headphone output for headphones, and there’s a LAN socket if you’d rather hardwire your TV to the internet than stream wirelessly.

Navigating Tizen, Samsung’s latest TV software, has become second nature to the What Hi-Fi? team, and as an improvement on the full-page ‘hubs’ that clad 2014’s TVs, it’s something of a success. Like with LG’s WebOS, tiles of allocated apps and channels run along the bottom of screen, with most operations overlaying current viewing for minimal disruption. It’s generally foolproof and menus are logical and straightforward.

When it comes to picture performance, the UE32J6300 may not have the wow factor of the headliners – the sharpness of 4K, the inky blacks of OLED – and of course there’s the underwhelming size…

But it puts in a solid, pretty faultless stint: squeaky clean and autumn leaf crisp, with clarity and coherence leading the way.

Iris – a documentary on 93-year-old fashionista Iris Apfel – is a delight to watch. The onslaught of colour throughout the show is both punchy and bright, and after fine-tuning the Samsung’s picture settings for further refinement and accuracy, glitter sparkles and beads reflect, while Iris’s thick-framed glasses are a good advert for the Samsung’s deep, solid blacks.

Over to John Wick on Blu-ray and the Samsung manages to unearth clarity and dark detail in the film’s dingy, underground palette. Suits are distinguished against the shadows, while city lights punch out of the night sky.

Standard def is sharper and cleaner than we’ve seen on small (40in) 4K TVs too – generally a benefit of Full HD sets over 4K ones. The inevitable downgrade going from BBC One HD to the SD channel is less disturbing here than in most cases.

Where it may surprise you is sound quality. The volume possible from such a diminutive set is generous, comfortable right the way up to 100, without sounding shrill or forced.

And while action scenes might not be as weighty or dynamically engaging as they would through a soundbar (or ‘base), we wouldn’t necessarily rush out to buy one for casual TV viewing.

It’s clear and detailed enough to get across a track’s essential information.

Picture quality is hugely competitive and its smarts (as with a lot of Samsung sets right now) set a benchmark of its own.