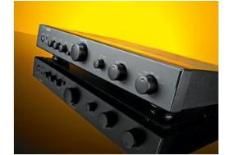 Got £300 for an integrated map? Don't buy one before hearing this

Look closely and it does indeed say ‘Special Edition' on the fascia. That, plus the extra £50 on your bill at the checkout, is just about the only indication the casual browser gets that this is an altogether-hotter rod than the venerable and well regarded Rotel RA-04 it replaces.

May 2010's First Test described the ‘Special Edition' treatment as a ‘startling upgrade to an already-strong performer'.

The looks are either timeless or tragically dated, depending on your point of view, but there's no denying the Rotel's solid build quality and extensive specification.

You go without a remote control, just like the original RA-04, but all the other news is good. Six line-level inputs, – one a fascia-positioned 3.5mm input – power to a couple of pairs of speakers, a likeable and accomplished moving magnet phono stage, a single tape loop and power-amp pre-outs make this as adaptable a machine as anything else in this class.

From the off it's a bold, tightly knit sound that the Rotel serves up; one with dynamism and detail to spare. Playing The Fall's Australians In Europe, it's just the right side of up-front – its vigorous, front-foot presentation offers a fine balance between drive and delicacy.

Expansive (up to a point, that is – it's no Cambridge Audio 650A), deft and with tremendously even and unified tonality, the RA04-SE punches solidly and remains commendably refined, even under the severest provocation (ie The Fall).

Refinement across the board
This level of refinement stands it in good stead when the music gets less spiky. The Rotel's just as happy wafting along with Paco de Lucia's Entre Dos Aguas as it is going toe-to-toe with clattering indie-rock, its poise and even-handedness coming to the fore even as it maintains its stance as a purveyor of high excitement.

There's the tiniest of trade-offs for all this zip and drama, though, and it's one that's apparent even if your musical tastes are completely unthreatening.

If partnered with equally brisk and attacking sources, or similarly inclined loudspeakers, the Rotel's breezy high frequencies begin to glint as dangerously as broken glass in the sand. Downright thoughtless system matching could well result in a bit too much of a good thing at the top end.

Take even a modicum of care in building your system, though, and there's absolutely no need for this latent clatter to become a problem.

In any well judged set-up, the RA-04SE will contribute thrilling and enduring musicality. It comfortably retains its five-star status and, as such, must be considered a compulsory audition.