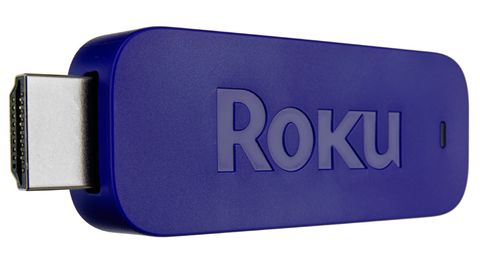 Not the smoothest operator around, but the Roku Streaming Service has a good bag of tricks

It’s all in the name: it’s a stick, and it streams. That’s about as literal as it gets.

We’ll start with the ‘stick’ bit. The size and shape is comparable to that of the Google Chromecast. Think of a chunky memory stick, with an HDMI plug at the end of it, which goes directly into your TV or AV receiver.

So about the name, the Roku Streaming Stick. It’s a stick, and it streams. Let’s start with the ‘stick’ part. It’s more like a dongle – at about 8cm long and 2cm wide, it’s not much bigger than a USB flash drive.

The build quality is good: it’s small, it’s not fragile. On one end is an HDMI plug for connecting to your TV. The other end features a microUSB port for power.

You’ll have to connect a USB cable – either into the TV or the bundled mains adaptor – because the HDMI port doesn’t provide power.

It’s not the neatest of set-ups, but then again it’s hidden behind the TV and you’re unlikely to see it. One potential issue is the width of the device: it’s a little wider than the average HDMI plug, so if your TV is tight for space you might find it a squeeze.

The set-up process is simple and is similar across the company's devices, including the Roku 3. Once it starts up, you’re invited to connect to your wi-fi network.

As soon as you do this, the Streaming Stick downloads the latest firmware – a process that takes us about three minutes. Then you’re invited to go to the Roku website to open a free account.

This is a neat way of choosing the apps you want, although you can also do it on the Stick itself using the remote. Whatever you choose on the website will automatically be downloaded onto the stick.

The app offering – ‘channels’, as Roku insists on calling them – is generous. There are over 1000 in the Channel Store and more are being added all the time.

Admittedly, most are very niche (Ringtone Channel, anyone?) but there are also plenty of essentials: YouTube, Spotify, BBC iPlayer, 4oD, Demand 5, Netflix, NowTV. There's no sign of Amazon Prime Instant Video yet, however.

Choose the ones you want and they’ll be stored in the ‘My Channels’ section for easy access. Operation is about as simple as it gets, with an interface that’s intuitive (and purple). Scrolling through menus is a fairly smooth experience, and button presses are obeyed swiftly.

Once you select an app, it takes about 10 seconds to load – about average for a TV app. The remote control is a joy to use. It’s a proper wand rather than the brittle ‘card’ type we so often see.

It’s ergonomic, responsive, and easy to navigate. It also pairs wirelessly with the Stick, so you don’t need to worry about line of sight. If you don’t want to use that you can use the Roku app, free on Android and iOS.

This gives you all the controls of the physical remote, but adds a full QWERTY keyboard – useful for those pesky alphanumeric passwords with capital letters.

There’s also ‘casting’, which is the Google Chromecast’s party trick (choosing content on a compatible mobile app and shooting it to your TV screen).

The stick fetches the content from the internet, while your phone or tablet acts as the remote control. Video output goes up to a crisp 1080p, but what you actually get depends on the app you use and, most importantly, the strength of your wi-fi.

All good so far. But things begin to unravel when we compare the Roku Streaming Stick with its big brother the Roku 3, and with the Google Chromecast. These other options highlight a number of flaws here.

The disparity between the two Roku devices is due to a difference in processing power, and yes, the Roku 3 is pricier, but it also offers more features.

As for casting, the Google Chromecast’s expanding library of apps leaves the Streaming Stick well behind. It’s also not unusual for the Stick to choke on a cast, while the Chromecast casts effortlessly.

When we first reviewed the Roku Streaming Stick, we gave it five stars. It’s still an impressive little package for the money, but there are better alternatives.

MORE: How to add catch-up TV and online movies to your TV