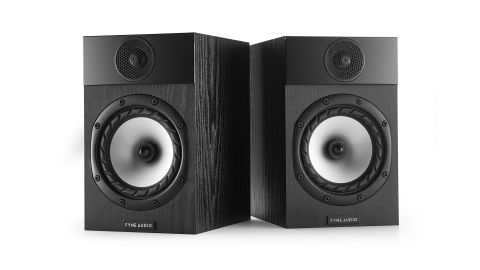 Fyne Audio will have to drop the ball at some point, but with these capable F300s, the company has shown that this is not yet the time

In its first year of existence, Fyne Audio has shown that it has a gift for building class-leading floorstanding speakers – as a mantelpiece decorated with What Hi-Fi? Awards will attest – but it is by no means a given such aptitude will be reflected when the scale is reduced.

We’re putting the company’s F300 standmount speakers, which we recently tested as the rear channels in Fyne's F302 5.1 system, under the microscope as a stereo pair – and they’ve grasped their opportunity to shine.

Resembling a passport photo of Fyne’s Award-winning F302 floorstanders, these diminutive bookshelf cabinets house the same 25mm polyester dome tweeter with a gloss black headband; below it sits a multi-fibre mid/bass driver that is similar to the F302s’ but smaller at 12.5cm in diameter.

It also features the same detailing on the surround of that driver: a tyre-like design built to aid solidity and reduce distortion. Spin the F300s 180 degrees and you’ll notice each has a rear-firing ported chamber for shoring up that low-end response, while a bracket can also be attached to the back of each speaker for wall mounting.

We wouldn’t suggest taking that route with the F300s, unless you are short on space and using them as rear channels in a home cinema system, but their stature (156mm wide and 211mm deep) makes them easy to accommodate.

That extends to their positioning as well. Not only has Fyne Audio priced its F300 range aggressively, its understanding of customers in this area of the market has contributed to some very unfussy designs.

The F300s don’t mind having their backs against the wall, nor in fact being as far out in the room as we’d place their floorstanding cousins. However, we prefer them somewhere in between, which tends to make the most of Fyne’s knack for timing and clarity while affording a good amount of sonic body.

MORE: How to choose the right speakers

Regardless of your preferred listening position, the F300s are capable of an admirably engaging performance. We’ve already mentioned Fyne’s mastery of timing, but its real triumph is that no particular talent sticks out – everything sits comfortably as a well-developed whole.

The F300s offer detail and clarity that contradicts their entry-level price tag, not to mention a bass weight that belies their size. While some competitors may over-pack the low-end frequencies, leaving their presentation sonically pear-shaped, or otherwise hint at bass notes without conviction, these slender standmounters are able to deal out bottom frequencies with insight, punch and relatively little fanfare.

There is still that slight coarseness in the upper register we’ve heard across the range, but that isn’t present in class leaders from Dali and Q Acoustics. The courseness can be tempered by savvy system building, while still making the most of these Fynes’ copious abilities.

What may be more difficult to dial in elsewhere in the chain is the extra excitement offered by those rivals. The F300s are by no means lacking in dynamic expression; they’re entertaining, often arresting and are able to convey both large- and small-scale shifts with relative ease.

But there just isn’t that infectious enthusiasm we’ve heard from their floorstanding siblings, that ability to reach out and pull you up to dance. It’s the difference between not wanting to and not being able to turn them off.

Like the artist whose sculpture is already in the marble, there’s a gem here waiting to be found. Fyne Audio just needs to smooth a few more edges before the F300s can become a masterpiece like its F302 and F501 Award-winners.

These are great bookshelf speakers for the money; it is just that they sound like great entry-level speakers rather than blur the lines between price categories, as their class-leading rivals do.

See all our Fyne Audio reviews