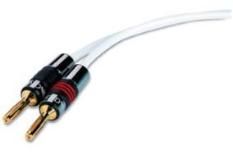 A great budget cable from QED

Predictability can be either a blessing or a curse. There's the blissful safety of knowing what's about to transpire, or the crushing inevitability of a given result.

In the case of QED's speaker cables, however, the transference of positive attributes within the range, such as an even and well-integrated tonal balance, and more than capable detailing, can only be a good thing.

And so it proves to be with the well-made and firm-feeling X-TC. This sits squarely in the lower end of the competitive budget cable market at a very reasonable price of £4.00 a metre.

Given John Barry's grandiose Space March (Capsule In Space) the X-TC is able to handle the rippling strings and solemn dynamics with ease, while syncopated electronica such as Four Tet's A Joy propels itself along in its own weird way just fine, with the lithe QED neatly capturing the tricky subtleties and time signatures.

Treble and midrange to the fore
Locking horns with Chord's all-powerful and Award winning SilverScreen however, the X-TC shows itself in want of some lower-end heft, which in turn highlights the treble and midrange frequencies a fraction too much for our liking.

It still proves to be a worthy rival though, and at £2 cheaper than the Chord, one that won't affect your wallet quite as much in these austere times.

Despite its few shortcomings, this is the most capable budget cable we've seen here in a long while, and it should be firmly on your audition list.