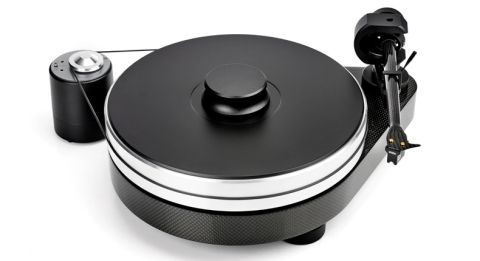 Solid and authoritative turntable, but it could be more expressive

If you’re the kind of person who gets drawn in by The Best Of… CD for £5, ‘with any purchase’, or puts 12 tins of baked beans in your trolley instead of the two you need to save 26p, and you happen to be in the market for a new high-end turntable, you might be interested in one of Pro-Ject’s latest spinners.

A successor to the RPM 9.2 Evolution, the RPM 9 Carbon uses the same guitar-pick-shaped plinth, but this one is encrusted with resin-coated steel pellets for greater heft and rigidity.

If the name wasn’t enough of a giveaway, Pro-Jet has also covered it in carbon fibre to further reduce unwanted vibrations. Carbon fibre has also been chosen for the tube on the inverted-bearing 9CC Evolution tonearm.

Aside from the material’s intended sonic repercussions, its shimmery, speckled finish makes sense from an aesthetic point of view.

The RPM 9 Carbon really is a sight for sore eyes and rightfully looks a cut above its smaller siblings and the Regas dominating midrange turntable territory.

A new aluminium platter has also been fitted, featuring internal damping and a super-smooth vinyl top that Pro-Ject recommends using without a slip mat.

The RPM 9 Carbon uses a belt drive mechanism with an automatic speed control switch, which saves you having to adjust the belt manually. That’s built into an outboard motor and controlled by a single button; press it to start, again to change speed between 33 1/3 and 45rpm (a blue LED flashes as it adjusts), and hold it down for a few seconds to stop it.

While the Pro-Ject comes part assembled, it still requires a bit of work from your end – see it as a labour of love. First off, you need to screw the three feet onto the threaded bolts on the plinth’s underbelly, using the spirit level afterwards to ensure it’s flat, and mount the platter.

MORE: Watch how a vinyl record is made (in 60 seconds)

The outboard motor – a tube-like piece – fixes to its own base, and sits to the left-hand side of the chassis. Then you also need to adjust the counter and balance weights.

Of the former, there are four to choose from depending on whether the weight of your cartridge is 5g or 14g – this is where you’ll have to consult the manual’s guidelines.

Further adjustability for vertical tracking angle and cartridge azimuth is built into the arm too, to make most of your cartridge.

When all that’s done, all you've got left to do is plug the thing into your amp or phono stage via the RCA outputs, and put the hefty disc-like clamp onto the spindle.

Like many Pro-Jects before it, the RMP 9 Carbon is unmistakably authoritative and full-bodied in its stride, promising nothing less than a hearty, yet composed, introduction to Pink Floyd’s The Wall album.

The commanding organs and theatrical riffs that open In The Flesh? sound big and solid, the cogent war effects and helicopters that drill through the instrumentals are vast and imposing.

In the same breath, rippling electric guitars, dramatic drum rolls and Waters’ echoed vocals assert themselves with a weighty confidence and strong stereo imaging, and there’s all the resolution and cohesion we expect from a turntable of this price.

Leaving the clamp off dilutes the presentation’s sense of assurance and solidity somewhat, so we wouldn’t go without.

While not the last word in conviction, the Pro-Ject is hardly coy. In Supertramp’s From Now On, keyboards thrust through the soundstage with resolve, although we have heard more effervescent renditions where Rick Davies’ fingers sound close to going through the keys.

The bass line is taut and dynamic, while cymbals slice with the degree of precision and tangibility that conjures the image of the samurai sword decapitation in Kill Bill vol 1.

The way the sweet melodic saxophone solo freewheels through the soundstage shows off the Pro-Ject’s dynamic range, although more expression wouldn’t hurt.

And it’s not quite as quick on its feet as it needs to be to convey the jubilant pace changes in Michael Jackson’s The Way You Make Me Feel. It has to be said; musically we’re left a little wanting.

Although there are decks that can carry a rhythm track with more verve and dynamic articulacy, the Pro-Ject has plenty of sonic skill and aesthetic class to rationalise its asking price.

For this price, it’s a fine turntable indeed.