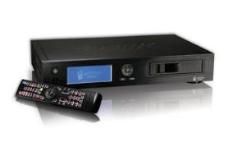 A little specialist, but stunning value for rip and download enthusiasts

The Popcorn Hour C-200 builds on the capability and flexibility of its smaller, cheaper A-110 sibling.

As in that player, the C-200 is available in various forms, with this iteration offering the delights of substantial built-in hard-disk space (500GB) and its own, internal Blu-ray player.

Now, don't get over-excited. You can't go ripping films from one drive to the other: copyright protection simply won't allow that to happen.

What the new capability does mean, however, is that you could, if you want, own just one box – this one – to stream all your music and movies, listen to internet radio, display your photos and play your Blu-rays.

Set-up is a little more complex than with rival players such as Apple TV. That's partially because the C-200 is more of a specialist product than its Apple rival – but it's also because it's far more flexible.

Supports all manner of file types
It'll support a huge range of file types, and the design's new screen makes operation easier than with some players of this type, including the A-110.

And in action? The C-200's picture quality is fine: yes, you'll notice some subtle judder with Blu-rays, but otherwise HD quality from the built-in player is solid enough.

Images from the hard disk are similarly capable, and if sound is a little soft, in context we'll consider that fair enough. This is great-value kit.