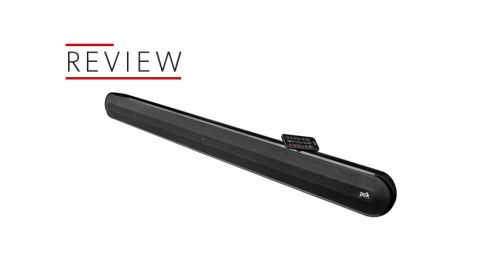 An unfussy and inoffensive soundbar, but if you’re after an expressive, more immersive performance then we'd suggest spending a little extra

Reasonable really isn’t the word. In fact, a soundbar costing only £150 seems such a bargain – especially when you consider our cheapest Award winner, the Yamaha YAS-207, costs more than double that. We’re quite pleasantly surprised to open the box and find there’s one actually in there.

The Polk Signa Solo certainly isn’t the first budget soundbar to enter our testing rooms, but, as we’ve yet to find anything we prefer to the four-star JBL Boost TV we heard at £170 in May last year, it’s with some anticipation we set it atop our television rack.

But the enticing price tag is hardly reflective of a lack of development on the part of Polk: the Signa Solo features the company’s SDA digital surround technology, seeking to heighten and widen the soundfield and offer more detailed stereo imaging, and VoiceAdjust, which enables the listener to tweak bass and ‘voice’ levels for potentially clearer, crisper dialogue.

Polk also claims to offer ten times the bass weight of your average television set, which is perhaps not so surprising when you consider the Signa Solo’s four 64mm drivers, each having its low-end output tuned by a built-in reflex port.

In theory, this should satisfy all but the exceptionally bass hungry, negating any need for an external subwoofer and effectively offering even more value for money.

Essentially, the Signa Solo looks a lot like a soundbar. It’s quite long, spanning almost a metre, but the option of wall mounting – a wall mount template is also included – provides an alternative option for those without the space to place it on its front.

It’s a welcome feature, given that it’s likely to be paired with a modestly sized set. More importantly, it doesn’t feel like a budget product, with build quality evidently a focus.

Across its brow you’ll find controls for power, Bluetooth pairing, switching between sources and volume, while to the rear are terminals for optical (a cable is included) and aux inputs, alongside the mains power.

The remote isn’t the most substantial – an ultra-lightweight model reminiscent of a burner phone, which would at least make The Wire a more immersive watch – but we wouldn’t expect much more given the price of the unit itself, and it is packed with plenty of features.

This, for example, is where you’ll find those buttons for adjusting levels for ‘voice’ and bass, positioned across its midriff in line with the main volume controls. There are also pre-sets titled movie, game and music which supposedly make more wholesale tweaks to those parameters for you, and a night-time mode to reduce those neighbour-irking low frequencies.

Polk’s SmartBar technology also allows you to use the controls on your usual TV remote to work the Signa Solo. Set-up is as fuss-free as plugging it in and selecting the Signa Solo for audio output from our TV, and with that we’re tuned into This Morning.

The Signa Solo is bound to be an improvement on the sound of most, if not all, budget televisions.

Its presentation is bold, and sound is dispersed well; it fills our testing room with an authority that for most slimline affordable tellies with rear-firing speakers would be out of reach.

Our first real engagement with the remote, though, is to remove some of that bass weight. Until we do so, the soundfield is overly congested, but once done, dialogue is clearer and space emerges.

Now there is distinction between voices and background music or studio noise, letting the former take front of stage and allowing for an overall tidier presentation.

The low end still sounds fairly soft, but we’re able to stop it being quite so intrusive so easily, with just a little rudimentary EQ-ing.

Alas, we’re powerless when it comes to injecting any of the largely absent dynamic range or expression. While there is nothing coarse or unpleasant about the Signa Solo’s performance – not necessarily a given at this price – it seems relatively unenthused by much of what we throw at it.

Whether it be the hormonal shrieks of young Beatles fans while spinning a Blu-ray of Eight Days A Week, Jeremy Kyle’s goading on ITV or the blast of a Shelby-orchestrated explosion from Peaky Blinders, the Signa Solo delivers it all with the same straight face: bold but flat.

Paired with a fairly loose-fisted grip on organisation, it doesn’t make for an exceptionally musical performance when we run through a couple of Tidal playlists over Bluetooth, either.

The Signa Solo’s wireless connectivity will be a useful addition for those able to connect to their TV that way, but anyone half serious about decent music reproduction will still need to buy themselves a separate wireless speaker.

As an experiment, we decide to place Audio Pro’s Award-winning Addon T5 speaker alongside the Signa Solo for comparison.

The Polk, as you’d expect, offers a wider dispersion of sound, with the Addon T5 as predictably sending its sound more directly toward the listener.

The £180 Audio Pro, however, offers a quite drastic improvement on the Signa Solo’s level of expression, detail and organisation.

The Addon T5 is, of course, nominally a wireless speaker, and for those specifically seeking a soundbar the Signa Solo remains a decent option.

It offers a superior alternative to the sonic performance of most budget televisions, which, at £150, would be its natural partner.

If this is your budget and you seek a soundbar that performs its task aptly, without necessarily excelling in any particular respect, the Polk Signa Solo is a decent option and worthy at least of a fair trial.

See all our Polk reviews