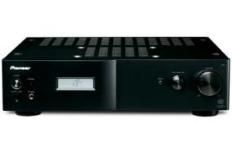 Exciting but not the most substantial or explicit listen.

This amplifier's brother, the A-A6-J, scored the full five stars when we tested it in March 2008. The A-A9-J, though, finds itself plunged into the thick of the most competitive price-point for two-channel amplifiers.

In other words, there are some outstanding amps around at this money, all waiting to boss around those new products that enter the fray with ideas above their station.

The Pioneer at least has the showroom bases covered. Like its cheaper sibling, it's eye-catchingly curvy – no rival can touch its visual drama. The specification is on the money, combining a USB input with a moving magnet/moving coil phono stage.

The fascia is attractively uncluttered, too: functions such as tone controls are handled by the cheap-feeling and even cheaper-looking remote control.

As seems compulsory with Pioneer amplification, the A9 is an assertive listen, especially where the upper frequencies are concerned.

Play Elvis Costello's Couldn't Call It Unexpected and the Pioneer presents a fast, attacking sound on a wide soundstage. It keeps a keen eye on fine details, and renders Costello's vibrato well.

Despite the broad soundstage, though, the Pioneer sounds a little congested – it can't focus musical strands as effectively as some.

There's also a lack of body and dynamic substance here, meaning music doesn't carry the mass or momentum that the best rivals can offer.

Like we say, this price point is a minefield – and we can't help thinking Pioneer has bitten off slightly more than it can chew.