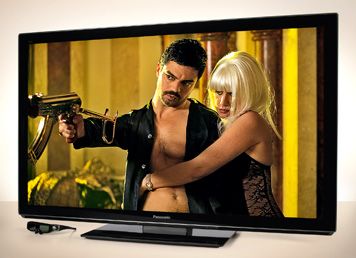 Best 52in+ TV, Awards 2011. Seriously good in so many ways, the VT30 has set the benchmark at this screen size

If you want a Panasonic screen over 50 inches, then you’re stuck with choosing the 55in or 65in sets from the company’s VT30 range. But this isn’t exactly the end of the world, as the VT30 range is the most lavish, advanced weapon in Panasonic’s TV arsenal.

Being a premium model, the VT30 boasts bags of features and the pick of the company’s picture enhancing gubbins including Infinite Black Pro, High Contrast Filter Pro and 600Hz motion processing (although don’t assume that the bigger number necessarily means a better picture).

There’s also support for SD cards and the ability to record live TV on to an external hard drive via one of the TV’s two upwards-facing USB sockets.

Four HDMI inputs run along the left had edge of the rear panel, while ethernet, optical out and Freesat and Freeview HD aerial connections are positioned in a less accessible, downward-firing recess. (The sockets are so tight that Panasonic includes extension cables).

Comfy 3D active-shutter glasses
Thankfully, Panasonic isn’t as tight when it comes to giving 3D glasses away: the VT30 has two pairs of active-shutter goggles, which are much more comfortable and ergonomic than last year’s. A suave-looking remote completes this attractive package.

And attractive is just one word you could use to describe the VT30’s image. It excels with high-definition content, producing a delectable image that’s rich in detail and colour.

Spin Hanna on Blu-ray and the VT30 not only gets the darkest areas inky black, it also refuses to lose any information or edge definition contained within the shadows. The image’s punch and vibrancy is a step on from older Panasonic plasmas, and this just adds to the entertaining picture.

Switch to some 3D content and the VT30 shows no real weaknesses. There’s little motion instability to speak of, and the general level of brightness and vividness means there’s a serious wow factor here. The picture is smooth and sumptuous, which makes viewing 3D content hugely entertaining.

Freesat images are a tad sharper
If you’ve the facility to do so, plump for the Freesat images over their Freeview equivalent. There’s just a hint of extra sharpness, clarity and stability that’s most noticeable when you’re comparing high-definition channels – but you can’t really grumble about either tuner.

The TVs internal scaler is up to the job of handling standard-definition off-air signals and normal DVD discs, too: the end result is detailed and cohesive.

The Panasonic also makes a fine fist of sound quality. The two 6W and one 10W speaker configuration sees the set fire out a decent amount of weight compared with some of its waif-like rivals – but it also exhibits enough clarity and openness so as not to sound closed-in and boxy like many flatscreens.

The TX-P55VT30 is such a capable all-rounder that it’s a real struggle to
find any serious criticism. It might not be the cheapest set around, but this level of performance is worth every penny.