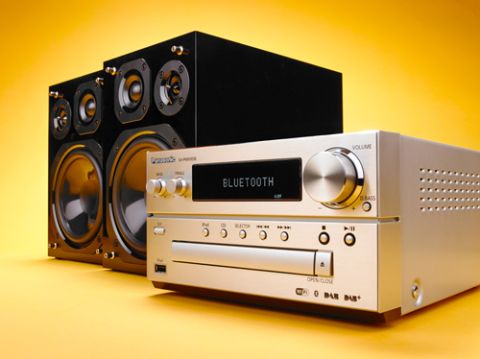 A system with stacks of detail, but its laid-back nature loses too much excitement for our liking

The Panasonic SC-PMX9DB micro system is going straight for the Award-winning Denon D-M39DAB’s jugular. Not only does it offer a far wider set of features, it also serves up super-detailed sound.

But at over £100 more, can it beat our long-time favourite?

The Panasonic SC-PMX9DB shrugs off an all-matching colour system, instead opting for a silver receiver unit and black speakers.

These speakers hold a three-way set-up of a 14cm woofer, 2cm dome tweeter and a 1.2cm super-tweeter, with an improved diaphragm in the tweeter that Panasonic says should result in an even clearer treble.

The front panel of the receiver is fairly busy, but neat with it. Its controls cover pretty much everything you’ll find on the remote, including bass and treble tweaks, source selection, volume and music controls.

Also on the front is the CD drive and an Apple-approved USB port (which will accept MP3 and FLAC files from a USB key), as well as an Apple Lightning dock, hidden under a flap on top of the unit.

However, there’s also a host of ways to stream your music wirelessly through this micro hi-fi system, with AirPlay, Bluetooth and DLNA all built in.

Between AirPlay and Bluetooth, we’d certainly recommend sticking with Bluetooth for overall ease and stability, although if you do own an Apple device you will get a touch more clarity and insight with AirPlay. Bluetooth aptX or A2DP support would certainly not go amiss here.

The system’s built-in wi-fi is easy to configure. Apple device owners can simply share their connection by wiring up to the unit and following a few on-screen commands, while Android users will do better to download the Panasonic Stereo System Network Setup app from the Google Play store.

There is a way of connecting to the system directly, too. Use Direct Connect. This lets you stream music without a wi-fi network too, and is also pretty straightforward to set up.

Note, though, that no internet-based streaming will be possible with such a connection – only music stored locally on your device.

Elsewhere, DAB and FM tuners are included as standard, with 20 and 30 presets respectively.

In a lot of ways, you can hear where your extra cash has gone with the Panasonic SC-PMX9DB. It’s arguably the most detailed, most composed system we’ve heard near this price, even nudging our Award-winning Denon D-M39DAB for out-and-out insight.

Its midrange is really well judged and its treble stays on the right side of brightness without ever becoming grating.

It goes loud too, with a good stereo image and a big sound that shouldn’t have a problem filling a reasonably large room.

However the bass, while deeper than any other systems at this price, feels a little on the soft side and lacks the solid punch that you’ll hear on the Denon, for example.

This gives it an overall feeling of being a little too ponderous and laid-back, and although it’ll satisfy your bassy urges with a deep, low rumble, it actually acts as a bit of a dead weight to any track that has some get up and go.

If you listen to a lot of upbeat music, this system’s lack of excitement and laid back presentation could well become an issue.

We attempted to tweak the EQ settings to help lighten the load on the low-end somewhat, but it seemed to take the oomph out of the bass without making it any more agile.

Go too far and tracks started to sound far thin. While these controls can work to find a balance that more suits your preferences, smaller tweaks rather than big changes work best here.

The Lightning dock is a welcome inclusion, and through it there’s a nice tone to the presentation. It has a similar character to CD playback, but with slightly lighter bass and a shade less detail.

As for DLNA, once on our network we use the free Panasonic Music Streaming app to play tunes stored on our NAS drive without a problem – the system is capable of playing back WAV, FLAC and MP3 files.

The Panasonic SC-PMX9DB is a well-featured micro system that only falls short when it comes to performance-per-pound.

While we love the extra layer of detail it offers over rivals – not to mention its wide range of connectivity options – its slightly sluggish bass and could-be-better-dynamics leave it with a solid four stars.