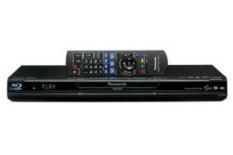 Top-notch new rivals doth not a bad BD player make, but this Panasonic is no longer our budget weapon of choice

This is the model that replaces the Panasonic DMP-BD35, the recipient of a Best Buy Award last year.

''Simply sensational' was how we referred to it just a few months ago, which may make the sight of four, not five, stars rather hard to swallow – not least if you've already bought one. We don't expect this to go unnoticed so we're happy to meet the issue head-on.

We'll start by delving into that review to pluck out the phrase, 'every bit as enjoyable as the machine it replaces'. That was no resounding endorsement now, was it?

Truth be told, while the 'BD60 undoubtedly represented fine value and an impressive level of performance, Panasonic hadn't gone out and raised the bar with its latest generation of Blu-ray players. Rather, it retained the high standard already set.

Rivals have returned stronger
Having now given the likes of Pioneer and Sony time to release their next-generation models, it's no massive surprise that they have managed to improve on, essentially, Panasonic's last-but-one range of players. And so it has come to pass.

It wasn't just picture performance that failed to push on, either. This deck's predecessor, the 'BD35, was arguably every bit as competent when it came to HD soundtracks.

There are new players around (we're looking at you, Sony and Philips) that deliver a little more control and composure, alongside greater detail and dynamics.

But if you're the proud owner of a DMP-BD60 who's struggling to keep their chin up as you read this review, fear not, it remains eminently capable, as you're no doubt aware.

Specification is up to speed for a Profile 2.0 player, though there are no multichannel analogue outputs, while Gran Torino confirms that the sharply drawn edges, naturally balanced colours and fine attention to detail all remain present.

The gap in ability between this and the best (and more expensive) players is there, but far from glaring.

DVD playback proves similarly satisfying, with Gomorrah looking as dirty and seedy as it should. Only some fast motion causes the 'BD60 to lose some of its poise.

We didn't think you could dare ask for more from a Blu-ray player at this price – but evidence elsewhere, particularly in the form of the Pioneer BDP-360 and Sony BDP-S360 – now suggests otherwise. While this player's time at the top may have come to the end, it's still seriously capable.