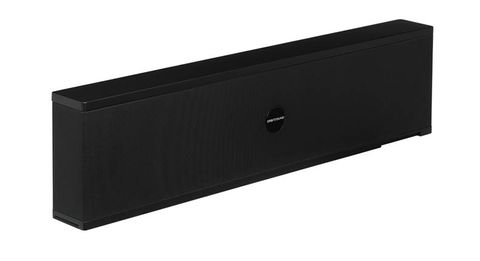 A middling soundbar. It’s not an unpleasant listen, but there are more capable alternatives for the same money

Technically speaking, ‘Orbitsound’ would be difficult achieve. Sound waves need molecules to be moved and since there are few in space (certainly not enough to significantly move the eardrum), it’s generally accepted that sound can’t be heard.

In space, no one can hear you scream. Orbitsound’s new P70 One, however, is capable of making a sound – and while it isn’t out of this world, it’s probably of better quality than that coming from your television.

For a start, the Orbitsound easily fills our medium-sized room. Despite looking pretty small it manages to pump sound into our medium-sized TV room with ease; and that’s without turning it up to its maximum volume.

We hook it up via its optical connection, and play the 2016 reboot of Ghostbusters. As the malevolent ghost of Gertrude Altridge drifts into the room, and spits gruesome green goo at Erin Gilbert (Kristen Wiig), the P70 One matches that impact with a notably punchy bass that might even make you recoil.

It’s good at conveying dynamics too, as the rise and fall in volume of the Enterprise’s engines is forceful and pretty precise, a characteristic that’s present in its handling of smaller scale audio.

In Star Trek: Into Darkness, when Uhura and Spock argue the P70 One never sounds flat; the soft, quiet soundtrack during the scene remains delicate too.

The depth that this soundbar’s downfiring woofer can reach is certainly impressive; you can feel the rumble of spaceships taking off and the bassy collisions that convey the weight of big action sequences.

But while it’s tight, and low reaching, the P70 One lacks the detail needed to really have its bass shine. The engines starting or the splatter of ghostly vomit should have a guttural texture to them, but from this soundbar they’re a little too smooth.

The quality of detail in the midrange suffers from a similar problem. Nick Cave & The Bad Seeds’ Girl in Amber is a bleak, heartfelt track, and a suitably insightful soundbar will be able to reveal that.

There should be a palpable, wavering fragility to the vocals that doesn’t come through enough on the P70 One, which sounds a tad congested and unclear.

What’s more, the P70 One pushes the midrange forward – tonally balanced towards those mid-level frequencies and as a result overpowers the upper and mid-treble.

We’d also like this soundbar to be a bit more sophisticated in its organisation; playing The xx’s Heart Skipped A Beat over Bluetooth, each instrument is kept neatly distinct and individual, but this soundbar doesn’t allow enough distance between the vocals and background claps or bassline to be spacious.

While it’s likely to be an improvement on your TV’s speakers, at this price point the P70 One faces a fair amount of competition and, while it doesn’t perform badly, other rival soundbars perform better.

The P70 One has all the features you would expect from a soundbar. On its base is a 3.5mm input jack and an optical connection, while on its side is a button to pair the soundbar via Bluetooth to your wireless devices.

A line of LEDs on the front indicates volume, and they change colour to show which source you’re using. If you’re the type that likes your music loud, you can add an extra 7.5dB of gain on top of the P70 One’s maximum volume by holding down the volume up button on the remote.

That remote might not be to everyone’s tastes, though. Rather than having both the up and down volume control buttons in one unit, they are split into separate buttons, one on each side, that will take some getting used to.

But if you don’t get used to it, you can always use your own. The P70 One has IR learning functionality so you can link it to your television remote.

You also get some control over the P70 One’s bass and treble, to an extent, with dedicated buttons to increase and decrease those frequencies (although we prefer to keep it natural).

Orbitsound has fitted those drivers into a compact enough body, which measures at just under 80cm long. It’s a pretty sleek design, so it’s a little disappointing its sound quality isn’t as good.

The P70 One is a middling soundbar. It’s not an unpleasant listen, and if its price dropped we might see its popularity rise.

But right now, there are more competent products on the market that means this Orbitsound get the Orion’s Belt of ratings: three stars.

See all our Orbitsound reviews