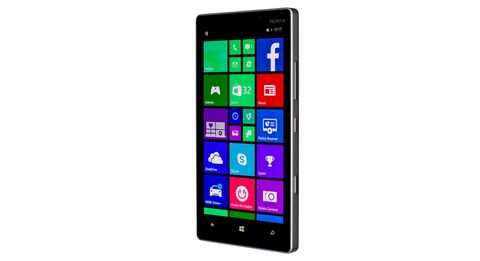 The best Windows Phone we’ve seen to date, but not quite the full monty

Nokia is in transition. After four years of being the champion of Microsoft’s Windows Phone operating system, Microsoft recently bought the hardware division of Nokia’s business.

But with its name emblazoned on its colourful back panel, the Lumia 930 is still very much a Nokia phone - and it could be the best Windows Phone yet.

In a market filled with increasingly slimmer phones, the Lumia 930 feels chunky. At 9.8mm thick, it’s added over a millimetre in bulk from the Lumia 925, and it’s pretty heavy too.

But in true Nokia style, the build quality is solid. The back panel is plastic but feels nice next to the metallic trim, which has well-placed buttons for volume, power and camera-shutter.

Our sample is a striking lime green, but there’s orange, black, or white as well. The Lumia 930 is capable of wireless charging.

It’s nothing new - the LG G3 can do the same, but the big difference is Nokia includes a wireless charging pad in the box. It’s a nice touch.

The Lumia 930 packs Windows Phone 8.1, the most recent update to the operating system. It brings new features that feel somewhat borrowed from the likes of Android and iOS.

The biggest, and handiest, addition is the swipe-down notification pane, which holds toggles for things like wi-fi and Bluetooth, plus details on missed calls, messages and emails.

There’s also a more customisable homescreen. It looks as good as any Windows Phone, with live tiles constantly changing with information updates. But its biggest problem still remains its app selection.

Microsoft has managed to play catch-up to some degree and now most of the main apps you’d want – BBC iPlayer, Spotify and Netflix – are available, though some of them are lesser versions of those you can get on Android and iOS.

Games suffer too, and if you’re a Candy Crush Saga fan you’ll have to go cold turkey if you want to go Windows Phone - not to mention deal with older versions of games that have been out on iOS and Android for months.

That aside, the Lumia 930 is a lovely phone to use, and dips in and out of apps with all the speed you need.

The 5in 1080p OLED screen is a delight, with 441ppi that puts it up there as one of the sharpest screens on the market.

This shows in its video performance, which is packed with fine detail that gives a tangible feeling of depth to images.

Blacks are as deep and inky as we’d expect from an OLED display and whites punchy, with colours reproduced vividly and with strong contrast.

They can verge on looking a little overdone at times, but it doesn’t take away from a largely superb viewing experience.

Music performance isn’t quite as strong, but it’s still perfectly listenable on the go. It doesn’t have the rhythmic drive of the Xperia Z2 or the iPhone 5s, but it’s still punchy and engaging.

It’s a well-balanced presentation, with a deep bass, controlled treble and plenty of detail. Our biggest problem with the Lumia 930 is file compatibility – we are unable to load our collection of CD rips in WAV or FLAC.

The camera on the Lumia 930 is as good as you’d expect from a Nokia device, with a 20-MP sensor, wide f/2.4 aperture and Carl Zeiss optics.

Focus is rapid, pictures are crisp and colours well balanced, and with a good handle on contrast for the most part. There’s no HDR mode in the default camera app though, which can make snaps in direct sunlight a little washed out.

In low light, we notice a bit of grain starting to creep in, but the dual flash can help with that, and there are plenty of manual options for white balance, shutter speed, ISO and exposure compensation if you want to fiddle around with the settings.

Video is captured in 1080p with a range of shutter speeds, with four microphones built in to help improve sound, while there is excellent image stabilisation too.

The Lumia 930 is easily the best Windows Phone we’ve seen, with a gorgeous screen, great camera and video performance that easily competes with the best Android phones out there.

However, we still want more from the apps side of things, and its file compatibility is restricted.

That’s still too much for us to consider it for the full five stars.

See all our Nokia news, reviews and products