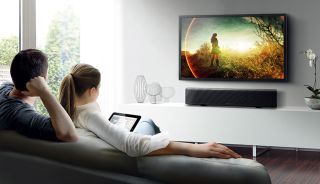 As well as bouncing sound off the room's side and rear walls, Intellibeam also bounces sound upwards off the ceiling using upward-firing speakers within the soundbar.

This means that instead of more traditional in-ceiling units or add-on module speakers, Yamaha reckons you’ll just need one soundbar to create the Atmos effect, which will be tempting for those short on space.

The YSP-5600 packs 44 array speakers, 12 of which are responsible for reproducing the Dolby Atmos ceiling speakers, alongside two built-in subwoofers and an optional separate wireless sub, for delivering extra punch to the low-end.

DTS:X will also be supported later via a firmware update once the technology becomes readily available.

Yamaha's YSP range will also see the addition of the YSP-1600, a discreet, slim soundbar measuring just 6.5cm high, as well as the SRT-1500 soundbase.

All of the above will also come with Yamaha’s newly announced MusicCast multi-room technology, automatically making them part of a multi-room system with any other products in Yamaha’s 2015 range.

MORE: Read all our Yamaha news and reviews