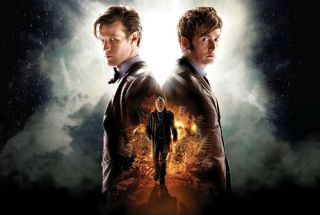 Hello everyone, and welcome to The Week in HD, where it's officially Christmas-time!

Our guide to all the must-see high-definition TV shows, films, sports and Blu-ray releases to grace your screens over the next seven days is full of festive fun and holiday cheer, with favourite and classic Christmas films aplenty.

Doctor Who: The Day of the Doctor Blu-ray

Steven Moffat's ode to everything Doctor Who was a better celebration of the show than anyone could've ever hoped, with plenty of easter eggs and winks back to the entire 50-year history of the show, no to mention plenty of additions to its rich mythology. There are plenty of mini-episodes and special features accompanying the official 50th anniversary special, so if you're a Whovian, make sure this DVD/Blu-ray is top of your Christmas wish-list.

Zack Snyder attempts to reboot the Superman franchiese, with Henry Cavill taking on the mantle of the Kryptonian hero. It might not have unanimously pleased fans, but there are some cracking actions scenes, and it has paved the way for a Superman vs Batman film in the very near future.

Danny Ocean and his gang of lovable thieves concoct an elaborate plan to pull off the biggest heist of their lives: steal millions from three Las Vegas casinos. It stars one of the best ensemble casts ever assembled on screen, and beats the pants off the Rat Pack original.

A fascinating in-depth look at how the modern day Globe Theatre came to be a fixture on London's South Bank. It charts how the new theatre was reconstructed after a fire took out the Shakespeare-era original.

It's semi-finals week, with eight contestants remaining after four gruelling weeks of trials to impress chefs Michel Roux Jr and Monica Galetti. Tonight, the eight semi-finalists have to serve up a single scrumptious dish with just one aim: feed Gregg Wallace. Feed him well.

The Marchioness. Rhys Ifans returns as the affable Mycroft, but does he really want his younger brother's help with a case or does he just want to flirt with Watson?

The six semi-finalists get paired off and sent to work at two Michelin-starred restaurants. First up is Heston Blumenthal's Dinner, where they must keep up with a busy service before recreating one of the inventive gastronomic dishes. If that's not enough, they also have to create a two-dish menu of their own to impress the judges.

One of my favourite films of all time. Tim Burton's finest creation – Jack Skellington, the King of Halloween Town – decides to take over Christmas when he grows weary of the same old Halloween routine every year. With wonderfully macabre creatures, fantastic songs, and a heartwarming story that celebrates the weirdness of Halloween and the magic of Christmas, this is a brilliant start to the festive season.

The Bridge. The agents call upon the help of Mike Peterson (the excellent J. August Richards) when they're up against big bad Centipede once more.

It ain't Christmas ’til Home Alone's on TV. Kevin McCallister's antics has been a yearly fixture in my Christmas routine, and this year, I'll be decorating my Christmas tree while watching young Macaulay Culkin booby-trap his entire house to catch bumbling burglars Harry (Joe Pesci) and Marv (Daniel Stern).

Gotham at Christmas. Criminals Penguin and Catwoman get into the festive mood by raining down misery, crime and violence on the hapless citizens of Gotham, making a tussle with Michael Keaton's Batman inevitable. Michelle Pfeiffer is on scenery-chewing form here, while Tim Burton's direction depicts a more gothic Gotham than we're used to.