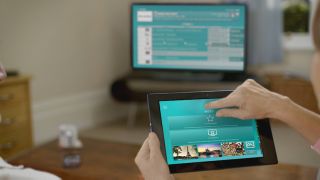 EE has announced a range of updates and improvements to its TV service. The first of which is ‘My TV’, which allows individual users to have their own personalised space. My TV is split into three sections: My Programmes, my Channels and My Photos & Videos. The first two sections provide recommended content, whether it be live TV or recorded content. Content can be sorted by channel, watched/unwatched, alphabetical, date or category.

My Photos & Videos allows users to view all content stored on their device via the EE TV app and can share this content with the EE TV box via the Flick feature.

A new Fetch feature allows content from the EE TV box, to be viewed on a mobile device, and it’s compatible with live TV, recordings, Restart and Replay.

EE has also added MUBI to its line up of content applications, that offers access to a wide range of films for £4.99/month. Customers can try the service on a one month free trial.

The new updates and channels are available now as a software update.

HDR content on Amazon Prime has been available in the US for a couple of months, but now it’s made its way across the pond to the UK. Only the first season of Amazon Original series Mozart in the Jungle is available and the pilot episode of another Original series; Red Oaks. Amazon has said more titles will be available by the end of 2015.

It’s also worth noting that the 4K HDR content can currently only be watched on Samsung’s SUHD range of TVs.

B&O Play has introduced a new feature that will allow users to pair two BeoPlay A2 (right) or two Beolit 15 (left) speakers together for a new stereo experience. B&O says the update brings with it “outstanding Bluetooth audio and streaming quality, along with minimal audio coding delay and latency.”

Both speakers also receive a new “Natural” colour finish. The software update for both speakers will be available from the August 27th.

B&W has begun producing a series of field experiments, putting sound recording and reproduction to the test. The first experiment has seen Sam Nightingale, a sound engineer, record the sounds around and inside a beehive, and replay them on a B&W T7 wireless speaker, to see if he can trick the bees into thinking it's their home.

The video shows Sam placing microphones around the trays and into the belly of the hive and listening back through headphones. He mentions the "cocktail effect" of sound, which describes the way humans are able to still pick out a singular voice, even when there's a cacophony of sound around them.

He says bees communicate in a similar way, either when foraging for food and to find their way back to the hive. The experiment masters the recording and plays it back on a T7 speaker - which uses a honeycomb structure for extra ridigity - and witnesses the bees flying to it. Magic...

See all our B&W news and reviews