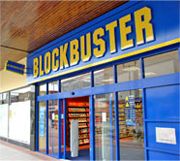 Administrator Deloitte has confirmed that 164 further Blockbuster outlets will close in the coming weeks, as it attempts to slim down the chain sufficiently to find a buyer.

A spokesman said: 'We have continued to review the performance of individual stores since our appointment a month ago and have concluded that further closures are necessary in order to restructure the company for sale.'

The remaining stores will continue to trade while Deloitte pursues negotiations with bidders.

Administrators have confirmed today that Blockbuster will close 129 more stores in the UK, with 760 staff facing redundancy.

The DVD rental chain has already given 31 stores notice of closure. The chain has 528 stores and employs 4190 staff across the UK.

Deloitte, the accountancy firm running the chain, says the closures will not take place immediately. It has kept the chain trading while it tries to find a buyer.

Joint administrator Lee Manning told the BBC: "Having reviewed the portfolio with management, the store closure plan is an inevitable consequence of having to restructure the company to a profitable core which is capable of being sold."

In the last hour Sky News has broken the news that DVD rental chain Blockbuster has become the latest high street name to call in administrators, following the recent collapses of camera retailer Jessops and entertainment company HMV.

Sky's City Editor says that the company, which has 528 outlets in the UK and employs 4190 staff, faced increasing competition from online DVD rentals and streaming services.

Lee Manning of Deloitte, who has been appointed joint administrator says that 'We are working closely with suppliers and employees to ensure the business has the best possible platform to secure a sale, preserve jobs and generate as much value as possible for all creditors.

'The core of the business is still profitable and we will continue to trade as normal in both retail and rental whilst we seek a buyer for all or parts of the business as a going concern.

'During this time gift cards and credit acquired through Blockbuster’s trade-in scheme will be honoured towards the purchase of goods.'

Blockbuster's UK operation is one of 17 countries where the brand is in use, and at one stage the company had 4000 stores in the US, and 2500 more globally. The US operation has been cut back to around 1000 outlets, following the company's 2010 filing for Chapter 11 protection with debts of $900m.

It was bought by US satellite broadcaster Dish Network in 2011, after a failed bid by South Korean company SK Telecom, and has for a long time been running online operations alongside its 'bricks and mortar' presence, but seems to have fallen victim to other widely available online offerings.