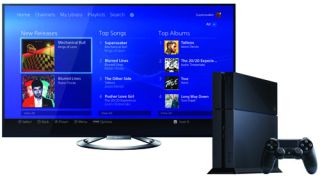 Sony has chosen the launch of the PlayStation 4 as the perfect time to give its Music and Video Unlimited streaming services a brand-new look.

Sony claimsl the menus are much simpler and easier to navigate and gave us a first look at the new lay-outs at a preview event, ahead of its launch on the PS4.

Music Unlimited offers all the functionality of similar subscription-based services, such as Rdio and Spotify, including the ability to stream new releases, build your own playlists and start your own 'radio' channels based on your favourite artists.

Tap the share button on the PS4's new DualShock controller, and you can even go social, sharing what you're listening to with friends on Facebook and Twitter at the press of a button.

At the moment, you can only share a screen grab of what you're listening to. But, we've been told by Sony that it hopes to be able to introduce the ability to share complete playlists at some point in the future.

If your followers also subscribe to Music Unlimited, they'll then be able to stream complete playlists from their account. Those who aren't signed up will be able to hear a short, 30-second clip.

Sony also told us that they're looking into the possibility of implementing voice search in the not too distant future.

We were also given a quick demo of the PlayStation 4 streaming music over the top of a game. You can alter the volume level of the music independently at any point, just by pausing the game, so it shouldn't overpower the game's soundtrack.

Sony told us software developers could block the use of this function if they wanted to, citing examples of games such as Guitar Hero, where you might not want any possible conflict.

This technology is exclusive for PS4 in the UK and Australia at the moment, but will be rolled out to other terrritories as well as Sony's Xperia, Bravia and PS3 products at a later date.

Every customer who buys the new PS4 will get a 30-day trial of the new Unlimited services.

For all the latest news on the next-gen consoles, take a look at our PlayStation 4 vs. Xbox One: comparison.