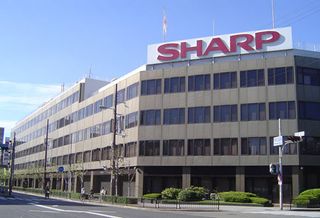 The Japanese company blamed weak demand for its displays and restructuring costs for the losses, which come on top of a ¥376.08 billion loss in the 2011-12 financial year.

Last August, Sharp had predicted a loss of ¥250bn in this financial year – but the company has well-exceeded that prediction.

Operating losses at Sharp came in at ¥146.27 billion from a loss of ¥37.55 billion this time last year. Revenue remained virtually unchanged at ¥2.48 trillion.

Sharp confirmed two new giant LED TVs just last week, and there was a new range of Sharp TVs for 2013 at CES – even as the company blames weak demand for its panels for the losses.

The company has largely been kept afloat by making cuts and offloading aspects of its business. Sharp sold some of its TV business to Lenovo earlier this year and has been off-loading manufacturing plants, too.

Sharp also cut a deal with Samsung back in March – much to the displeasure of many people in Japan.

Sharp's shares closed up 4.9% on news of the losses.