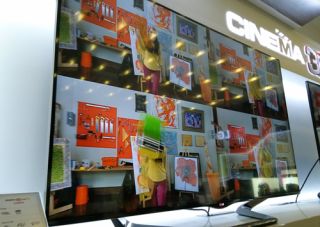 LG has taken top spot in the UK 3D TV market for the first time, beating Korean rival Samsung in to second place.

The last week of March saw LG take 35% market share of the 3D TV market in the UK, with Samsung in second position with 28.8%.

The figures, released by GfK, show positive growth for LG, which represented just 8% of the 3D TV market back in April 2011, though of course weekly figures are liable to fluctuate.

More than a third of the value of the £2.6 billion UK TV market in 2012 came from 3D TVs, though with 3D now a standard feature on most mid- to high-end 3D TVs, it doesn't tell us how many people are actually watching 3D content at home.

LG remains bullish about the importance of 3D TV, despite admitting the key focus areas for the 2013 TV market are Smart TV, 4K Ultra HD and OLED TV.

LG also confirmed it was working on glasses-free 3D TV, having shown an early prototype at CES 2013 at the start of the year.

For now, LG's Cinema 3D, which is passive 3D rather than active-shutter, remains the company's focus.