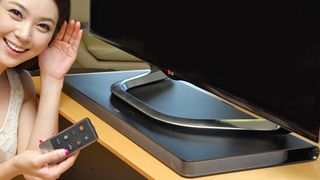 LG has revealed further details of its LAP340 SoundPlate TV speaker system, which will go on sale in the UK from late October for £350.

The company says it produces "superlative sound" thanks to a high-quality digital-to-analogue converter (DAC) and speakers fitted with dual neodymium magnets.

A 'Cinema Mode' can be engaged with the click of a button, to deliver virtual surround sound and deeper bass.

The LG SoundPlate can be connected to the TV wirelessly (handy if your telly is wall mounted), or using a single cable if you prefer a wired connection. Bluetooth is included as standard so users can stream audio from smartphones, laptops and tablets to the SoundPlate.

LG plans to make a splash at IFA 2013 in Berlin next week with a range of new TV soundbars, including the SoundPlate (LAP340) shown above, a 4.1-channel system that is designed to sit under any 32-55in TV (like the Bose Solo and recently announced OrbitSound SB60 AirSOUND Base).

Dual subwoofers are built in to the system, which is just 3.5cm high, and is capable of firing sound in multiple directions for a more immersive AV experience, according to LG. Bluetooth streaming capability is also included.

Two more conventional soundbars, the LG NB4530A and NB5530, will also be on show at IFA. We've already tested the NB4530A and awarded it five stars.