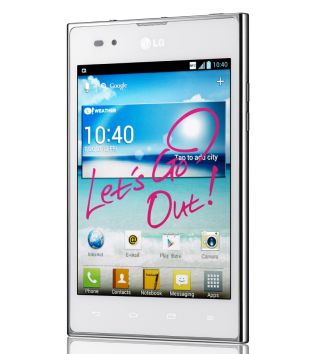 LG's largest smartphone, the Optimus Vu: – already on sale in Korea and Japan – is to be rolled out globally from next month.

The company announced today that the phone, which has the world's first 5in 4:3 aspect ratio display, will 'make its global debut starting in select markets in Europe, Asia, Middle East/Africa and Latin America starting in September.'

LG says that big screen 'blurs the line between traditional tablets and smartphones for a truly unique smart device experience': the new model has already sold half a million units in Korea since it was launched in March.

The IPS display has XGA 1024x768-pixel resolution, and is partnered with an 8MP rear camera and a 1.3MP camera on the front for video calling.

The phone uses the NVIDIA Tegra 3 mobile processor, which is a four-plus-one quad-core designed to balance performance and power consumption.

For processor-intensive tasks such as games and multitasking, the four cores are used, but for voice calling, email and music and video playback only the fifth, battery-saving core is used.

32MB of storage is provided, the operating system is Android 4.0 Ice Cream Sandwich, and the phone comes with a range of applications including an upgraded version of QuickMemo™ and Notebook.