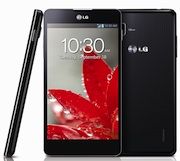 LG's Optimus G smartphone, already said to be one of the driving forces behind the company's US sales success, is coming to the UK.

Launched late last summer, the LTE/4G phone has been on sale in the USA, Canada, Japan and Korea for a while, but now LG has announced it'll be rolled out to over 50 more countries starting this month, including the UK.

The exact specification of the model to be launched here isn't yet known – there are some differences between the Optimus G sold in the States and the one on sale in Korea, notably in the main camera resolution – but the phone will use a 4.7in True HD screen with 1280x768-pixel resolution, and be powered by Qualcomm's Snapdragon S4 processor with 1.5GHz quad-core CPUs.

32GB of onboard memory is provided as standard.

Jong-seok Park, the head of LG's mobile communications company, says that 'LG’s long history of LTE know-how is evident in the DNA of the Optimus G.

'As such, we hope consumers will take a deep, hard look at Optimus G when deciding which smartphone will give them the best 4G experience.'