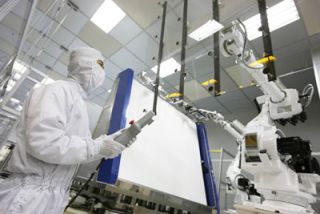 LG Display, the Korean company's screen-making operation, achieved record sales in the last quarter of 2012, swinging it back into profit for the whole year.

That's according to figures just announced by the company, which attributes the results to the popularity of its passive 3D display technology.

Its record-breaking October-December sales amounted to KRW8.74tn (£5.1bn) , on which it made operating profit of KRW587.3bn (£344m), about twice the figure for the previous quarter.

The last two quarters have seen the massive display-making company making a profit for the first time in two years, and have been sufficient to give it an overall operating profit for the year, compared to a loss of KRW763.5bn (£448m) in 2011.

Quarterly sales were up 32% year-on-year, and 15% on the previous quarter, and it says a large part of this is due to the popularity of its FPR passive 3D products.

The impressive last-quarter sales figures also contributed to an impressive 21% increase in annual sale, which amounted to KRW29.43tn (£17.26bn) in 2012.