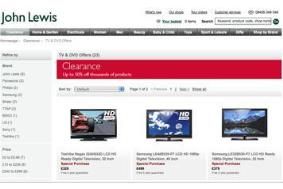 There are further reductions on the Sharp HTDV40H DVD home cinema system, down from £299 to £233.50 while stocks last.

If you're in the market for a Blu-ray player, John Lewis is giving away three free Harry Potter Blu-ray discs with selected Samsung models including the BD-P1600, BD-P4600, BD-P1580 BD players and HT-BD1220R Blu-ray system.

And for those who like their entertainment on the move, there's the Philips DCP951 portable DVDplayer/iPod dock for £155 (was £199).

These and many more clearance bargains can be found in John Lewis stores or online at www.johnlewis.com.