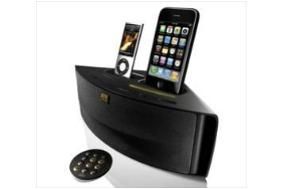 The Octiv 202 dual-dock system (pictured) uses the free Music Mix app to shuffle between songs from both players 'without missing a beat'.

You'll naturally need a Touch or an iPhone to use the app, after which you can let a friend add their tunes to the 'mix'. Due out in September it's yours for £80.

The Octive 202 is joined by the smaller Octiv 102. Also compatible with iPods and iPhones, the 102 doubles as an alarm clock radio.

And there's an app for that, too - the free Alarm Rock app allowing you to wake to your favourite choice of tunes. The Octiv 102 is £40.

And joining the two new iPod docks are the crazily named Muzx DNA earphones. There are six new in-ear models, ranging in price from £20 to £100.

All the new models are due out in September of this month.