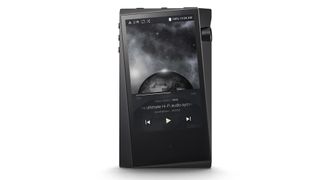 Portable music players are perhaps one of the most niche products we doll out What Hi-Fi? Awards to – after all, many people find their smartphones satisfactory for music playback. But those do-it-all companions in your pocket don't do music like dedicated players do – even the best-sounding phones pale in comparisons to the best budget PMPs.

If you prioritise sound and have the cash and a spare pocket – that's the reason jeans have two, right? – then this article's for you.

Here we round up the best portable music players between £140 ($180) and £1400 ($1699), starting with the Sony NW-A45. This budget Walkman, is, as we said in our five-star review, "a great little entry-level hi-res music player"; a perfect starting point for anyone wanting entertaining hi-res playback, whether that's of DSD, MQA or PCM (WAV, FLAC) files. It can transmit your music to wireless headphones via Bluetooth, and has 16GB built-in storage that's expandable via microSD.

The Cowon Plenue PD2 is our favourite player under £500, though, representing the next step when it comes to performance, storage capacity (32GB), and features – it builds on the Sony's spec with a 2.5mm balanced output and 45-hour battery life. "We haven’t heard a better-sounding budget portable music player, nor one with a battery that lasts as long."

Astell & Kern, a very familiar face in this category, picks up another two Awards this year, again for repeat winner A&norma SR15 (pictured top), and this time for a new, more premium entry, the A&futura SE100.

The former may be a little over £500, but it's the cheapest in the brand's arsenal, and is the bedrock of its reputation for excellent sound quality, features and aesthetic design. It combines dual-DACs, 3.5mm and balanced 2.5mm headphone jacks, 64GB built-in storage (expandable via microSD card), and built-in Bluetooth, wi-fi and Tidal. And its sound is subtle and insightful at every turn.

The A&futura SE100, meanwhile, may not be the company's most serious proposition – that would be the £3399 ($3499) A&ultima SP2000 – but its where our Award winners culminate. Of course, spending over three figures on a music player won't sit with everyone, but those that can afford the outlay won't be disappointed with the hugely capable performance on offer here.

Four Best Buy winners, but only one Product of the Year trophy to dish out at our Awards ceremony on Tuesday 5th November. Whose lap will it fall into? The wait's nearly over.

New issue of What Hi-Fi? out now: the best TVs your money can buy!