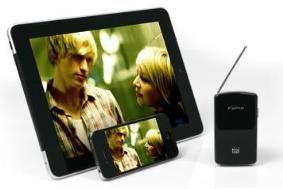 The tizi device is small enough to carry around in your pocket, costs £149.95 and has a replaceable Lithium-Ion battery with a life of up to 3.5 hours from a single charge. It can be recharged via USB from a laptop or by using an iPad power adapter.

Users will need to download the free tizi app to their iOS4 device from the tizi.tv website. The app provides a TV guide and also allows programmes to be recorded and stored for later playback, or copied via iTunes directly to a Mac or PC.

To view programmes on the go, all you have to do is turn the tizi unit on, select its pre-configured wi-fi network and start the app on your portable.

The app is fully compatible with iOS4's multitasking feature, so you can switch to other apps – say during the ad breaks – keep the audio running in the background, then switch back to the programme when it resumes.

"With tizi, equinux is once again at the forefront of innovation in the Apple arena. Tizi represents state-of-the-art technology in both hardware and software," says equinox CEO Till Schadde.

The equinux tizi is available now from Apple Stores and the tizi website. It will be available from other Apple resellers from January 2011.