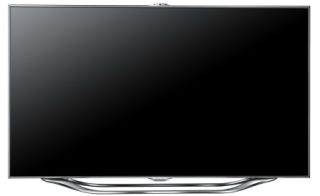 Samsung claims to have launched the world's most powerful smart TVs, with new models including a 55in SuperOLED set plus a new ES8000 flagship (above) that promises gesture/voice control, upgradeability and enhanced on-demand content options.

In a bullish press conference here at CES, Samsung proudly proclaimed its status as the world's no1 TV manufacturer, claiming that it now sells two sets every second.

Samsung's 2012 TV range claims to 'push boundaries', thanks to the combination of Smart Interaction, Smart Content and Smart Evolution.

Talk to your television

Smart Interaction is about changing how you interact with TVs - "it can listen, see and do what you want, without you having to touch a remote control," Samsung says.

This means voice and gesture control for the new ES8000 flagship TVs (of which more shortly), plus a camera that enables face recognition - so the sets deliver you personalised menus and content, different to that delivered to other members of your household.

Oh, and Angry Birds will be coming to Samsung - not just the game, but - exclusively - a series of free animated Angry Bird short films. More on all the content upgrades in our separate news story.

The 2012 TVs will have a slot able to take an evolution kit - these will be avaialble in 2013, with the aim of upgrading your set to include the functionality of next year's sets.

This 'Smart Evolution' means 'your TV will never be left behind,' claims Samsung.

This is in addition to the InTouch pack already revealed here at CES (see news story here) - a device that upgrades any TV to have features of the latest smart sets.

Samsung's new flagship LED LCD TV is the ES8000, which will be available in sizes up to 75in. The sets have an ultra-thin bezel and a new matching U-shaped stand - as pictured above.

Samsung claims you won't find a more powerful smart TV, due to its dual-core processor, which enables true multi-tasking - so you can, for example, toggle between apps and TV/movies.

The 2012 Samsung TVs will also feature an updated, Full HD SmartHub interface, making it easier to navigate all the new on-demand content. Again, more on that in this dedicated news story.

Why 'Super' OLED? Because the set eliminates the need for a colour filter, as its OLED pixel unit consists of RGB sub-pixels, each emitting its own light.

We're seeking out more details of all the 2012 Samsung sets, which will also continue to include plasma designs, and will bring you more information as soon as possible.