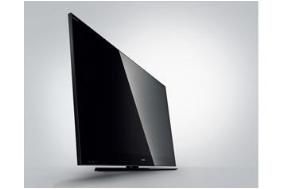 Just getting all the pictures together for a nice big blog with images of all the new Sony kit, plus tech specs and UK prices. Will be online later this afternoon.

Breaking for lunch now, and off to do a bit of filming with our handy Flipcam. More details to follow this afternoon, so keep checking the site for updates.

More TVs announced: the design-oriented NX range, all with built-in wi-fi, will include the 40in NX703 model at £1400. That price includes an optional stand that allows you to tilt the TV back by six degrees. The NX703 and NX803 (price to be confirmed) will be available in March/April.

All 3D-Ready and Full 3D sets are due on sale in June.

Sony BDP-S370 Blu-ray player due out in March for £180. Supports SACD over HDMI, and will also handle DiVX and DiVX HD. The midrange BDP-S570 model arrives end of May for £230, and the flagship BDP-S770 with 3D playback comes out in September for £299.

Only the BDP-S770 has multichannel analogue outputs.

As we reported earlier this week, all Sony's 2010 Blu-ray home cinema systems will be 3D-ready. Entry-level BDV-E370 out in March for £500. The 3D software update will be available from June.

Scheduled for June launch is the £399 HT-AS5 home cinema system with 3D pass-through and three HDMI inputs. But there's no built-in Blu-ray or DVD player.

Sony's 3D TV glasses won't work with other manufacturers' sets, only its own. Likely to cost around £100 a pair. Sony 3D TVs will be sold with two sets of 3D glasses as standard: you'll have to fork out for extra ones for the rest of the family.

OK, we're off, the official presentation has begun. We're watching a demo of Bravia Internet Video, streaming high-definition content for LoveFilm on demand. The service will be available on Blu-ray players and Freeview HD TVs.

The TVs and Blu-ray players will sync with your LoveFilm account. Buffering takes around 10 seconds.

Sony's 2010 Blu-ray players will come with BBC iPlayer. Coming to Sony TVs at a later date. As expected, the company has big plans for 3D TV and Freeview HD.

We've flown up to Gleneagles in Scotland for today's Sony UK 2010 product launch. We're hoping to see all the brand-new Bravia TVs, including 3D and Freeview HD models, as well as Sony's forthcoming Blu-ray player range and Blu-ray home cinema in a box systems.

Our first glimpse of the Sony 2010 range came at CES in Las Vegas last month. We're hoping to get details today of all the UK models and prices, so will be updating you here on whathifi.com throughout the day.

For an idea of what's in store, take a look at our CES 2010 Sony blog and our recent news stories.