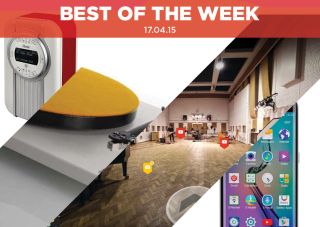 This week on What Hi-Fi? Sony announced a number of new home cinema products, ahead of Record Store Day (April 18th) the Official Charts Company launched the UK's first every vinyl charts and thanks to a partnership between Abbey Road Studios and Google, you can now go on a virtual tour of the famous recording studio.

Reviews-wise we got our hands on the new Samsung Galaxy S6 Edge (a return to form), listened to the Tannoy Revolution XT 6 (impressive) as well as the View Quest Christie radio (terrific retro styling). Read on for more details.

Abbey Road Studios and Google team up for a virtual tour

Thanks to Abbey Road Studios and Google you can now go on a tour of the famous recording studio from the comfort of your own home.

The new virtual tour – which you can start over at the Inside Abbey Road website – offers an in-depth look at the Studio One, Studio Two, Studio Three and the Mastering Suite rooms.

Colour-coded dots during the tour offer information on the building's history, and if you feel lonely producer Giles Martin, engineer Mirek Stiles, or BBC Radio 6 Music presenter Lauren Laverne can guide you through the experience.

It's the first time Abbey Road Studios has been 'virtually' open to the public, although that does mean you can't take a picture on the famous traffic crossing outside the studios.

MORE: Abbey Road Studios and Google team up for a virtual tour

Sony announced its line-up of home cinema products for 2015 and it sees the introduction of new AV receivers and soundbars.

The STR-DN1060 takes over from last year's Award-winning STR-DN1050 and is joined by the new STR-DN860. Both receivers feature support for high-resolution audio although Sony confirmed there will be no support for either Dolby Amos or DTS:X.

Elsewhere there's the Sony HT-ST9 soundbar and HT-NT3 soundbase. Like the receivers there are provisions for high-res audio support as well as Sony's new LDAC codec for high-quality Bluetooth streaming.

The products are due to go on sale in May but prices are still to be confirmed.

With vinyl sales on the up, the Official Charts Company has launched the UK's first ever vinyl chart.

It cements the turnaround of vinyl, a format which was in danger to being ushered out of existence by newer, digital formats. However 2014 saw 1.3 million records sold, the highest tally for almost 20 years.

It's still a relatively small slice of the pie (1.5% market share), but with Record Store Day starting tomorrow (Saturday, April 18th) the renewed interest in vinyl shows no sign of dissipating.

As a brand Vizio is not well known in the UK but in the US it's familiar for its range of affordable 4K TVs.

Dolby Vision will feature on the 65in and 120in 4K TV in the company's Reference Series range. There's no word on whether they will make their way to the UK, or whether Dolby Vision will make an appearance on these shores with other TV brands such as Panasonic, Sony, Samsung and LG.

15% of music fans buy music and never listen to it

Streaming and downloading set to overtake sales of physical formats

While we were impressed with the Galaxy S5 is some areas, in our minds it didn't surpass the brilliance of the S3. With the S6 Edge Samsung has definitely made a phone that's worthy of comparison.

It packs in a powerhouse of a performance and has a brilliant, elegant design. Despite that the alck of microSD storage and a removable battery are disappointing

Regardless this is a step in the right direction for Samsung, and a good platform from which to challenge the likes of Apple's iPhone and other Android handsets.

Part of Tannoy's revamped Revolution range, we expected good things from the XT 6 (above). And we weren't disappointed.

They focus on speed and agility, and while they favour a leaner presentation over rivals' more punchier sound, their exciting and crisp delivery are qualities we like a lot.

There's a lot of competition at this price range but keep on eye on the XT 6s – they're certainly worth a audition.

We look at the Christie and the word retro springs to mind. At this price there's little else that looks quite like this radio.

But it's not all about looks. There's a more-than-decent performance to be found with an expansive sound for its size.

Tonally we had a few niggles with how broadcasts come across, but overall the Christie is a capable radio. If you're looking for something distinctive, then put it on your shopping list.