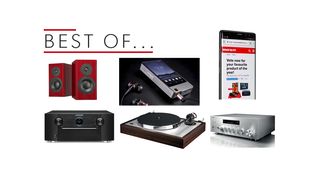 This week, Yamaha launched a behemoth of a stereo network receiver in the R-N803D, Marantz expanded its home cinema line with the AV7704 preamp and Hidizs is taking a swing at the hi-res portable music market by crowdfunding its AP200 hi-fi music player.

It is Yamaha's first two-channel receiver to benefit from YPAO technology, which measures the space of your listening area and adjusts the sound accordingly.

Connections won't be a problem, with digital and optical, Bluetooth and AirPlay, along with support for Spotify and Tidal, among others.

Marantz has replaced its AV7703 preamp with a brand new model, the AV7704.

Sitting below the flagship AV8802, its features eight HDMI inputs, all of which have 4K pass-through.

Hidizs: the high-end hi-res player on a budget

Funded through its Indiegogo campaign, the Hidizs AP200 will come with Android 5.1, support for 32-bit/384kHz playback, DLNA, aptX Bluetooth and wi-fi.

MORE: Hidizs: the high-end hi-res player on a budget

Signa Solo is Polk Audio's most affordable soundbar yet

10 of the best film scenes to test picture quality

Get the lowdown on our Readers' Award 2017 contenders

MQA audio: What is it? How can you get it?

What is Apple CarPlay? How it works, the apps, cars and features

The Note 7 was a debacle, but Samsung appears to have learnt its lesson with the Note 8.

It feels well built, the dual camera is decent quality for a phone, and the audio performance is good, with support for hi-res files.

The battery life could be better and, at nearly £900, it isn't cheap, but there's plenty here to keep you occupied until the inevitable Note 9.

The Special Fortys have great ability, with pleasing weight and agility matched with surefooted rhythmic drive. The sound is both bold and dynamic.

The design is overly familiar, but that's a minor quibble. A fun and entertaining time is to be had in the company of these speakers.

Pro-Ject's The Classic turntable is an aesthetically pleasing deck, but just falls short in other areas.

It's talented, boasting a full-bodied sound with a good sense of dynamics and decent timing.

But it falls short of the class leaders in fine detail and precision. Nonetheless, it's still very much worth an audition.