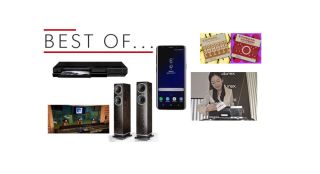 This week it emerged that (in the US) CD and vinyl outperformed digital downloads in 2017, Bowers & Wilkins announced a collaboration with Abbey Road Studios and Toshiba revealed it has launched a new cassette player that can offer the same sound quality as high-resolution audio.

Digital downloads are continuing to fall (in the U.S. at least), with revenues bringing in just over $1.3bn according to RIAA 2017 revenue statistics.

That figure confirms revenues of physical products have surpassed downloads for the first time since 2011.

Both are still in the shadow of streaming revenues, which has hit $5.7 billion and thus makes up 65% of the total U.S music industry revenue.

Bowers & Wilkins and Abbey Road Studios are collaborating on a new product.

It's not known what it is as yet, but we're expecting something in the vein of headphones or monitor speakers.

The partnership means B&W has become Abbey Road's official speaker and headphone partner, with the company's products to be installed throughout the iconic London studio.

The player contains a mechanism that supposedly improves the quality of the music data, ensuring it meets the performance of a high-resolution audio source.

You can thank What Hi-Fi?'s predictive powers - back in 2016 we ran an April Fools story on HD Cassette. Well done us.

Apple launches a new 9.7in iPad

As per the recently reviewed S9+, Samsung has opted for evolution rather than revolution for its S9.

There's new camera technology, a faster processor, better speakers and an improved user experience - evolution doesn't mean there has been a lot of tweaking.

While the iPhone X still wins out overall, the S9 is King when it comes to video. It's another strong proposition from Samsung.

Though it lacks the premium features of other, more expensive, efforts, you do get a crisp and natural-looking picture with excellent detail and colours.

The negatives? The sound could be punchier and Dolby Vision HDR is still 'pending'. Otherwise, there's no doubting the X700's qualities as a fantastic 4K Blu-ray player.

Fyne Audio is a new entrant into the stereo speaker market - and it's made quite the first impression.

The F501 floorstanders offer a detailed, revealing and engaging sound that, above all else, exudes confidence.

They require careful system-matching, but get it right and these are bold, accomplished performers.