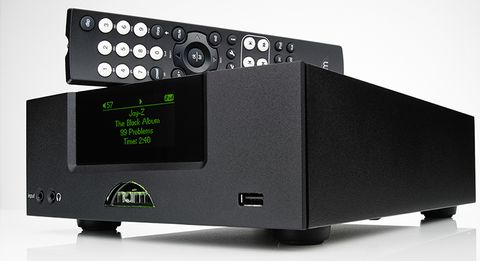 The Naim UnitiQute 2 has been a long time coming and a has a lot to live up to. From our very first listen to the original Naim UnitiQute to its subsequent Product of the Year Award at the end of 2010, our affection for the pint-sized streamer/tuner has been constant.

It’s not that the UnitiQute was particularly groundbreaking in its functionality or specification (in fact, its inability to stream Apple Lossless straight out of the box put it somewhat behind the curve), but what it did the UnitiQute did beautifully. ‘Open, fast and superbly weighted’ is what we said at the time.

Time, though, waits for no man – or music streamer, for that matter. Consequently here’s Naim’s UnitiQute 2, which to the untrained eye looks identical to the product it replaces.

Exterior changes are certainly very subtle. In fact, only the mini-USB socket for future firmware upgrades (it replaces the previous model’s RS232 port) and the model number itself are the visual giveaways. All the real, significant work has taken place under the bonnet.

The tuner, for instance is now DAB+ compliant on top of its DAB and FM ability. ‘DAB+’ tends to elicit responses from the rueful to the infuriated around these parts, but if the UK ever does decide to adopt DAB+ your UnitiQute 2 is ready.

And, more pertinently, it’s compatible with a wider range of countries and territories than it was without DAB+ reception on board. It can also access a globe-worth’s of content via its vTuner internet radio.

Far more relevant to the here and now are the changes to the digital section of the UQ2. The desire to optimise ground-planes and -paths has resulted in a new, four-layer printed circuit board – and there have been numerous component upgrades at various stages in a quest to drive down noise.

Otherwise, the new Uniti is specified similarly to the model it replaces – that’s to say, more-than adequately. A pair of digital coaxial inputs, a pair of digital optical inputs and a fascia-mounted USB socket can all access the Naim’s 32bit/192kHz Burr Brown DAC. There’s provision for a couple of analogue sources too, via RCA inputs on the back and a 3.5mm input on the front – this last connection doubles as a digital optical socket too.

Streaming from PC, Mac or NAS device (WAV, FLAC, ALAC, MP3, AAC and Windows Media-format files, again up to 32bit/192kHz resolution, are all catered for) can be handled wirelessly or via Ethernet. The headphone socket on the fascia is of the 3.5mm variety.

If you want to boost performance, there are pre-outs for a power amp and a BNC digital output for use with an even-higher quality DAC (there’s an RCA adaptor supplied to make sense of the rather arcane BNC connection).

Power is 30 watts per channel into 8ohms, and is delivered by amplification derived from Naim’s well-regarded Nait 5i integrated. It looks quite a tentative figure when written down, doesn’t it? In practice, ‘tentative’ is not the word that applies. There are separate power supplies for the digital, analogue and power amplifier stages.

The UnitiQute 2 feels reassuringly hefty, and the finish of its extruded, die-cast enclosure is impeccable. Control is either via the nothing-special-although-quite-logical remote handset or Naim’s functional-though-quite-intuitive n-Stream control app for iOS devices.

We’re pleased to report that although it’s not quite perfect, n-Stream is one of the better apps of this type we’ve encountered. Logical, comprehensive, smooth-scrolling and decently responsive, n-Stream is a much nicer experience than the rather humdrum remote. Of course, if it displayed album artwork with greater fidelity it would be better still.

The main unit’s display is a high-contrast OLED affair and the illuminated fascia logo functions as a mute button.

So on paper the UnitiQute 2 is evolutionary rather than revolutionary. Equally, it looks – on paper – to have every ergonomic, connectivity and specification base covered.

Plugged in, powered up and with a good few hours on the clock (our encounter with the original UnitiQute eloquently demonstrated the machine’s need for a thorough warming-through before it was ready to give of its best), the new Naim proves a thoroughly likeable and periodically enthralling listen.

Starting with some high-resolution audio (a 24bit/192kHz file of Uncle John’s Band from Workingman’s Dead by Grateful Dead – hi-res audio is, frankly, currently struggling to for contemporary relevance) shows the streamer at its best.

The ‘open, fast and superbly weighted’ character we noted in the UnitiQute 2's forebear is just as evident here, along with effortlessly accomplished timing and tremendous detail-retrieval.

The Naim enters and exits individual notes or hits with alacrity, allowing negligible overhang on even the deepest, most resonant bass notes. It creates a deep, wide and tall soundstage, positioning instruments on it unambiguously and describing interplay between them beautifully.

Switch to an equally sizeable file of Britten’s Billy Budd by the London Philharmonic and Glyndebourne Chorus under Mark Elder, and the Naim is unshowily adept at dealing with the additional complexity.

The top of the frequency range is crisp and full-bodied, but never threatens to spill over into harshness or brightness – even at considerable volume. (And the UQ2 is capable of considerable volume, that 30 watts per channel power rating notwithstanding.)

Midrange fidelity is just unarguable, the voices loaded with character. The subtlest variations in timbre, intonation or attitude all communicated in full.

Down at the bottom end the new UnitiQute digs deep, hits hard and exercises enough control to make even a slurry, lackadaisical Grateful Dead bassline simple enough to follow. All of this information, from the bottom of the frequency range to the top, is given equal billing – nothing is over-prominent, nothing is allowed to skulk into the background.

The Naim simply serves it up as per the source recording and does its damnedest not to stick its oar in too obviously.

Latterly, Naim has completed the nap hand of connectivity by adding Spotify Connect and aptX Bluetooth capability. This puts even more pressure on the UQ2’s already busy remote control, and a second aerial at the rear of the box isn’t all that elegant either, but that’s it as far as downsides go.

Spotify Connect is available to Spotify Premium subscribers, and because your £10 per month buys 320kbps music stream, the Naim remains a perky and upfront listen when being fed by a Spotify Player app. The sound from aptX Bluetooth is a fractionally more qualified success, as it gives away a fraction of the Naim’s muscular dynamic ability, but that’s almost a side-issue.

The point is the UnitiQute 2 now does everything an up-to-the-minute and serious-minded streaming system should.

Mind you, all of this was true of the first UnitiQute. Where the new machine scores over the old is almost certainly down to the changes to the digital section of the PCB. The UnitiQute 2 is a cleaner listen than the outgoing machine, with greater authority when it comes to the leading edge of notes and an even more martial way of organising a soundstage.

There’s greater detail and definition than before to low-frequency information, greater dynamic headroom, greater (though every bit as controlled) attack and a less restrained overall sonic signature.

One thing that hasn’t changed is the UnitiQute’s attitude to authentically low-resolution files. Consider 320kbps a minimum – anything more compressed than this is handled with something approaching disdain by the UnitiQute 2.

We listened to a copy of The Clash’s Guns of Brixton bought from the iTunes store back when 128kbps was considered perfectly acceptable by Apple, and to put it bluntly it sounds a mess. Ill-defined, badly organised and staunchly two-dimensional, it’s only marginally preferable to no music at all.

It’s a similar story where internet radio is concerned. There’s no denying the worth of France’s FIP, but even during the station’s forays into 170kbps territory the Naim refuses to be bought off: it sounds almost wilfully undynamic and flat.

You don’t have to stick with the rather limited and conservative hi-res audio that’s currently available, though – the UnitiQute may be unforgiving but it’s not unreasonable. So tracks streamed from Spotify are perfectly fine. Perky, even.

It follows that WAV or FLAC rips of CDs can sound impressive, particularly when they’re as well-recorded in the first place as The Flaming Lips’ The Soft Bulletin or Dusty Springfield’s Dusty in Memphis. The Naim sounds burly and poised with these files, granting singers breathing space and laying out its usual, beautifully cogent, soundstage.

These tiny powerhouses, teamed with the Naim UnitiQute 2, make up a tiny system of unlikely power and authority and the Naim was never audibly out of its depth.

So it’s a case of: meet the new boss, just enough of an improvement over the old boss to make you think long and hard about an upgrade.