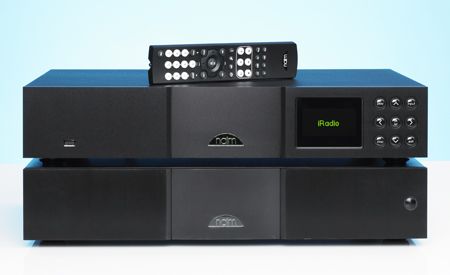 There’s a joke that goes around when the US military deploys somewhere: ‘Well, they were late for the first two world wars, so they’re making sure they’re early for the next one.’

So it is with Naim and digital audio: the Salisbury company is celebrated (or is that notorious?) for being a latecomer to CD, only launching its first player almost a decade after the format’s debut, but there’s no holding it back when it comes to network music-streaming.

It was there early with the NaimUniti, and it’s since become fully entrenched.

What we have here is the daddy, the product toward which the range has been moving since the first sniff of Uniti: Naim’s reference network music player, the NDS. And it’s a monster.

For a start it throws down the gauntlet to those who’d have you believe that how you stream can’t affect the sound, and that a little plastic box connected to a plug-top power supply will be enough to do the job.

The NDS is a solid 14kg of hi-fi, and that doesn’t even include power supplies and their heavy transformers: to the £6250 basic price you’ll have to add at least an XP5 XS power supply (£1595), but we suspect most buyers of the NDS will either start with that and then move up to the configuration we have here, or simply go straight for the NDS/555 PS set-up.

With the XP5 XS providing the juice the NDS is capable of super results, but the 555 PS drives it on to achieve the status of state-of-the-art home audio.

So if the NDS doesn’t have power supplies built-in, why’s it so heavy? Well, there’s Naim’s famous black casework extrusion, designed to isolate the circuitry within from mechanical and electrical interference as well as dispersing heat, but in this case there’s rather more to it than that.

The NDS has taken from previous high-end Naim components the idea of mounting critical circuitry on two sub-chassis, then floating these on leaf-springs to decouple them from the main casework.

The plates are made from brass, and the spring mountings were determined by 3D modelling to place them relative to the centre of gravity on the board/sub-chassis assembly. This ensures the whole thing only moves in the vertical plane in response to outside vibration.

The tuning of the springs, and the mass of the plates, put's the device's resonant frequency at 4Hz – well out of the audio band – and before the NDS is used four transit screws must be removed to free the suspension system to do its thing.

As on previous Naim streamers, incoming digital signals are clocked in, buffered and then clocked out correctly and consistently to the digital-to-analogue converter.

This is all done in the internal memory of a 40-bit floating-point SHARC digital signal processor capable of a billion calculations a second. This chip is able to choose incoming data-rates from one of 512 steps or, if that’s not good enough, employ an asynchronous sample rate converter to do the job.

The processor also implements the 16x oversampling filter, which is of the same design as that used in the Naim DAC. To keep power supply noise down – given that the DSP draws less current when it isn’t doing its sums – the filter is implemented using just five lines of assembly code.

Finally – well, not really finally, given we’re only scratching the surface of what’s going on under the lid of the NDS – the connections between the sections of the player, from the streaming board to the DSP section, and from DSP to digital-to-analogue conversion, are optical, to avoid transferring noise and interference between sections.

The attention to detail in the design of the NDS is fanatical, and it all pays off in the sound of this very superior streamer. Forget “streaming’s almost as good as CD” – this one will show up any disc player we know when playing uncompressed or lossless CD-quality files, then go on to redefine expectations when fed with higher-resolution music.

Frankly, if there’s a better way to play digital music in the home right now, we’ve yet to hear it.

It’s not just the bags and bags of detail on offer from just about every file you throw at the NDS, it’s the way the thing can boogie hard when required or just cruise through some sweet jazz or acoustic music, then drop down a gear and rumble out really nasty, dirty bass when required.

It’s the way you can hear that roar of amplification before Keith Richards lets fly with a solo, the sense of the presence of the audience on a live recording or just the space of the studio environment in the second or two between a track beginning and a chamber ensemble starting to play.

It’s the great metallic shimmer of a gong at the end of dramatic orchestral (or prog rock!) piece, the blare of brass and thunder of timpani when the familiar Fanfare for the Common Man theme surges through in the final movement of Copland’s Third Symphony; the way that powering rhythm section blasts out of the jungle on Frankie Goes To Hollywood’s Welcome To The Pleasure Dome; the machine-gun attack of Moon’s drums in The Who’s Won’t Get Fooled Again; the explosive power of the Storm interlude from Britten’s Peter Grimes.

Switch to a Karen Carpenter vocal and all her trademark fragility is retained, while the final note of a choral work or an acoustic guitar or piano hangs in space for a moment and then decays into the air around it.

It’s a massive, majestic, delicate, dynamic, emotive, immense and totally addictive sound, and the best of it is all this ability can even make a radio drama on BBC Radio 4’s 128kbps AAC streaming service highly enjoyable as readily as it can make you gasp with the sheer quality of a 24-bit/192kHz orchestral recording.

Yes, as statements of the obvious go, “£12,620 is a lot for a network streamer” is up there with the best. But it’s worth considering before you audition the Naim NDS: once you’ve heard what it can do, there’s likely to be no going back.