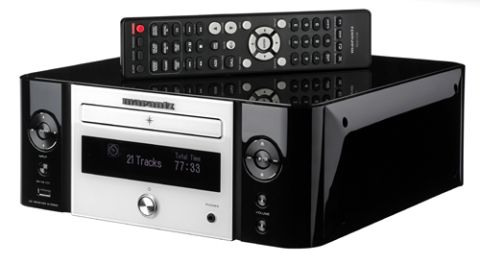 Product of the Year, Awards 2013. Marantz has done it again: this is an excellent all-in-one system

The last time we played with a Marantz Melody, we gave it an Award. Now there’s an update in the form of the Melody Media – or M-CR610 – and it’s every bit as impressive as its predecessor, the M-CR603, was in 2011.

The Marantz M-CR610 is an all-in-one box that lets you play music from just about any source. CD is par for the micro system course, and radio comes in FM and DAB flavours. Connect to the internet (via ethernet or wi-fi) and you’ll get internet radio, as well as Spotify and Last.fm.

Got your own content? You can stream it over your network or plug a memory stick in to one of the two USB ports, which support 24-bit/192kHz FLAC files and gapless playback. Apple users can connect iPods or stream using AirPlay.

There’s no Bluetooth, but given all these alternatives we won’t begrudge the Marantz one omission. It’s an incredibly versatile thing.

Set-up is easy. It took just a couple of minutes to connect to our wi-fi network, and even less with ethernet. From there, it’s just a matter of choosing a source.

You can do this by prodding the ‘Input’ button on the face of the machine, or

press the corresponding key on the logically laid-out remote control.

The best control method is the free Marantz Remote App, available for Android and iOS devices. It does everything the regular remote offers, but adds a keyboard for easy text entry with the likes of Spotify.

It definitely beats punching out ‘Queens of the Stone Age’ with numerical buttons.

So, to the sound. We start off the old-fashioned way and load up a CD. Remember those? The Marantz performs with a smoothness that goes well with a spot of Norah Jones. It’s a likeable presentation, with enough energy to give Shoot the Moon a sense of life.

It’s also a very clean sound, which lends vocals an element of directness. There’s a good amount of detail, and we were pleased by the scale on offer.

Switch to something a little more aggressive and the Marantz’s smoothness becomes more obvious. With Muse’s Hysteria – a track that’s packed with plenty of bile and bitterness (not to mention freaky space-synths) – the CR610 lacks a touch of bite, and its timing could also be a little tighter.

But these things don’t stop it from being a really entertaining listen. Just don’t go expecting a punch in the gut when the music turns nasty.

Time for another input, and we move to a USB stick containing a handful of high-resolution FLAC files. The Marantz demonstrates an excellent grasp of detail and subtlety with these, although the smooth character is the same.

In fact, we found this to be the case across the Marantz’s different sources, from Spotify to internet radio. It’s a consistently laidback and easy-going performer.

Overall, we’re happy with the Marantz’s performance. In absolute terms we could do with a bit more rough and tumble, but what you get is an appealing, likeable sound and a pleasing variety of sources.

All that, and it’s a looker too. The Melody has had a facelift, shaped to reflect some of Marantz’s premium products. You can get it entirely in glossy black, or glossy black with a white face. We think this Art Deco vibe looks quite nice.

So, Marantz has done it again. The Marantz M-CR610 is an affordable, good-looking box that does pretty much everything, bar Bluetooth streaming. And it does it very well.