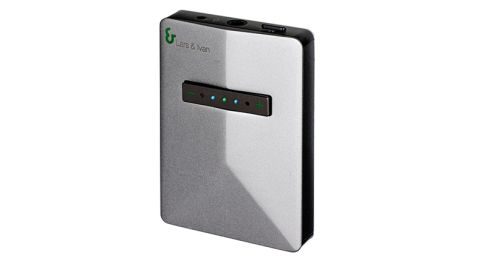 This affordable DAC is portable and easy to use, but it doesn’t set our world on fire

When we last tested a product from Lars & Ivan, it was the funky-looking perspex BK-21 iPod speakers. They also looked and sounded far more impressive than their £130 price tag, and subsequently won an Award (in 2007) for their efforts.

Can the Lars & Ivan DAC Fire follow in those ancient footsteps? Available from its online store, the DAC Fire is a small, portable headphone amplifier and DAC that costs just under £80 and aims to unlock the sound quality of your digital files.

Armed with a few high-resolution files and a Spotify playlist, we plug the DAC Fire into a MacBook Pro and start listening.

Compared with playing tunes straight from a laptop, the DAC Fire does add a touch more solidity to a song. There’s a definite sense of gravity behind Adele’s powerhouse vocals on Hello, with her voice having more weight when using the DAC Fire.

Switch to a high-res 24-bit/96kHz file of Michael Jackson’s Billie Jean, and the funky bassline is just that bit more solid.

But that’s about it. For the most part, the Lars & Ivan DAC Fire is an unremarkable performer. Compared with a rival DAC such as the Award-winning Audioquest DragonFly, the DAC Fire doesn’t add much in terms of detail, dynamics or openness.

In contrast, the DragonFly (£130) instantly breathes more life into a track – songs soar and charge ahead with greater punch and control, as well as sounding more nuanced and exciting.

The Lars & Ivan DAC doesn’t have any of that drive or punch behind it. It just sounds okay. Disappointingly, it’s not a big step up from listening straight out of your laptop.

It’s a shame that the DAC Fire isn’t more sonically impressive, as it looks unobtrusive sitting next to your laptop.

The DAC Fire is tiny. It’s shaped like a cigarette lighter, and is small enough to fit into the palm of your hand. There’s nothing wrong with the build and finish – the edges are smooth, and the minimal finish looks just fine – but it does feel a bit light and cheap in hand.

The volume rocker in the middle of the DAC is responsive though, and you can control the volume using either your laptop or the unit. A green LED lights up when plugged into your laptop to show that it’s working.

But we’re not sure why there are multiple blue LEDs blinking away at us when music is playing. It’s distracting and, in our opinion, makes the DAC Fire look a bit naff.

On the plus side, the DAC Fire is dead easy to use. It doesn’t need additional mains powering – just connect it to your device and you’re all set.

It’s a simple plug-and-play device, with a single micro USB port and a 3.5mm headphone plug at one end and it supports most files, including FLAC, WAV, AIFF and ALAC up to 24-bit/96kHz resolution.

You can start using the DAC from the moment you open the box, as the relevant cables are included. A micro USB to type A USB cable is included for plugging the DAC into a laptop’s USB port, as well as a cable with a micro USB plug at both ends for using with a smartphone or tablet.

Apple users will need a separate adaptor to use the DAC Fire with the Lightning port.

Interestingly, there’s also a built-in mic at the top end of the DAC Fire for recording purposes, just alongside the mute button. We’re not sure how many people use their DACs as a recording device, but the option is there should you want it.

The Lars & Ivan DAC Fire had the potential to be a more interesting and engaging DAC if given a little more care and refinement.

Its compact build, portability and ease of use are appealing, but the unremarkable sound quality is a let-down.